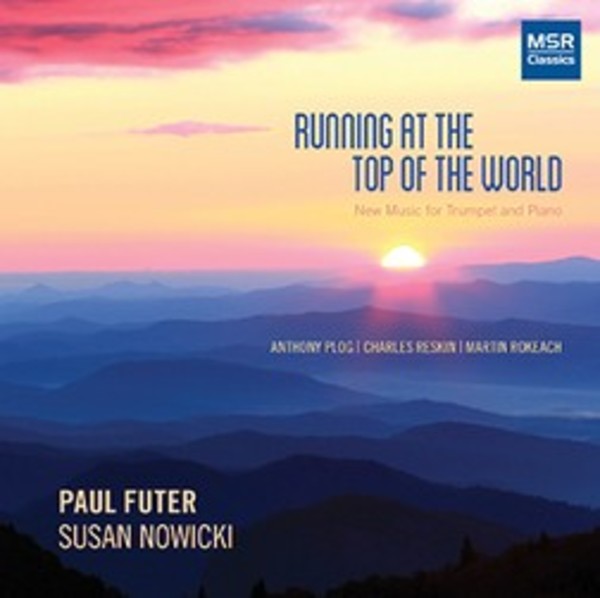 Running at the Top of the World: New Music for Trumpet and Piano

Running at the Top of the World

Running at the Top of the World

Anthony Plogs Trumpet Sonata was composed in 2003, and was commissioned by the University of Texas at Austin School of Music for Ray Sasaki. After its premiere performance by Ray and Jeanne Sasaki, the composer waited approximately seven years to revise the Sonata. The basic structure of the piece remains as it was heard at the first performance.

Charles Reskins music is known for its diversity, including an extremely wide range of musical styles and idioms. The Trumpet Sonata is a perfect example of how Reskin artfully combines these elements in a way that creates a new, unique sound that is very much of the 21st century. The piece is inspired by the American music  both classical and jazz  of the mid-20th century, and is an homage to the composers of that era. The first movement contrasts a lyrical first theme with an agitated, almost barbaric second theme group.

I first heard about Martin Rokeach's Running at the Top of the World from my trumpet teacher, David Bilger, who served as a judge for the International Trumpet Guilds Ellsworth Smith competition in 2012. At the event, Rokeachs new work was required repertoire for contestants. Full of complex sonorities, the piece is an exciting addition to the trumpet repertoire. Rokeach explores unique ways to write for both the trumpet and piano that are innovative and accessible.  Paul Futer


American trumpeter Paul Futer maintains an active career as a performer and educator throughout the United States. A highly regarded musician, he received critical acclaim for his performances with the Yale Philharmonia at Carnegie Hall, under the direction of William Christie, and can be heard playing Principal Trumpet with Symphony in C in Collingswood, New Jersey. Futer has recorded and performed with members of The Philadelphia Orchestra, American Brass Quintet, Philadelphia Orchestra Brass Quintet, Vince DiMartino and Yale Brass Trio, and has frequently been presented on WRTI radio.

Susan Nowicki has appeared throughout the United States as soloist and as collaborative pianist, and frequently performs with members of The Philadelphia Orchestra. A strong advocate for contemporary music, Nowicki has premiered and performed works with the ensemble Network for New Music, and has recorded numerous works for the Albany, Capstone, De Haske and North-South labels. She has also produced and performed on a release of chamber works by Jan Krzywicki for Albany Records.