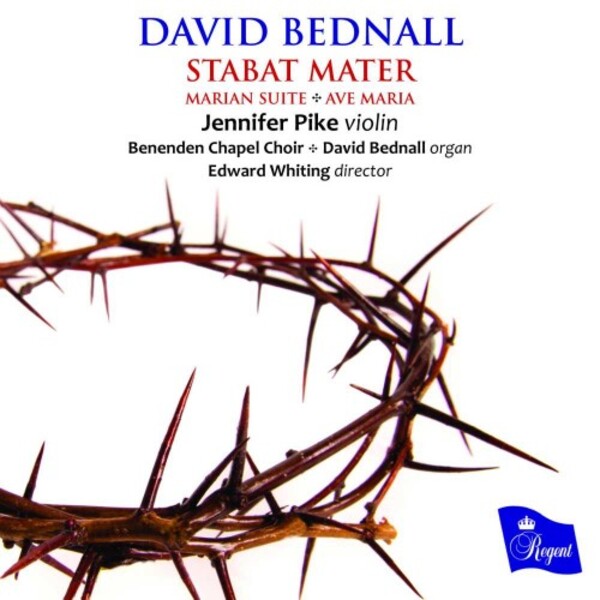 This fourth release on Regent entirely devoted to compositions by David Bednall is the first recording of his Stabat Mater and Ave Maria, both commissioned by Benenden Chapel Choir, and his Marian Suite for solo violin and organ, written especially for this recording.

Bednalls unique setting of the ancient Stabat Mater text telling of Marys grief at the foot of the cross on Good Friday is a large-scale work for upper voices and organ, and featuring an extensive part for solo violin. In this recording this is played by the internationally-renowned violinist, Jennifer Pike. In keeping with the Marian theme the disc has a wonderfully-attractive new setting for the same forces of the well-known Ave Maria text. Jennifer Pike also plays a new three-movement Suite for solo violin and organ, based on Marian plainchant themes.

David Bednall is recognized as one of the leading choral composers of his generation and has recently completed a PhD in Composition with Professor John Pickard at the University of Bristol. He is Organist of the University of Bristol, and Sub Organist at Bristol Cathedral. He studied the organ with Dr Naji Hakim and David Briggs, and was Assistant Organist at Wells Cathedral.

The first CD of his choral music - Hail, gladdening light with Wells Cathedral Choir under Matthew Owens - was a Gramophone Editors Choice, and a second disc with the Wells Choir, Flame Celestial, received much critical praise, including a Gramophone recommendation. The recording of his Requiem with the choir of St Marys, Calne, conducted, as here, by Edward Whiting, was a Classical Music magazine Recording of the Fortnight. Other highlights have included Missa Sancti Pauli, commissioned by St Pauls Cathedral for the London Festival of Contemporary Church Music, and commissions for the new music wells 68  08 festival. His Christmas cantata, Welcome All Wonders, commissioned by The Queens College, Oxford, was released on Signum Records in 2013, also to superb international critical acclaim.

This is the fourth Regent CD to feature music by David Bednall (b1979), one of Britains leading choral composers. ... The centrepiece is a new setting of the Stabat mater, first heard in New York last year, which received its UK premiere in June with the artists featured here. ... The young choristers clearly relish the vividness of Bednalls word-painting. This significant addition will surely be taken up by many of our other crack upper-voice choirs.  Malcolm Riley
Gramophone Awards issue 2016