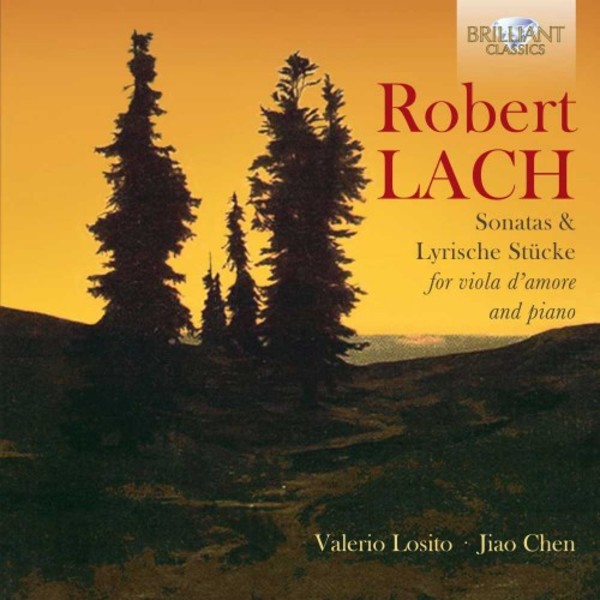 Robert Lach (1874-1958) is another name almost lost to history and now partially rehabilitated by Brilliant Classics. At least it will now be possible to hear the creative voice of this law-student turned ethnomusicologist whose more-than-cultural interest in German Nationalism produced many collections of vernacular material such as folksongs as well as a strong association with Hitlers National Socialist Party. In fact he was a stern critic of his colleagues slavish attempts to link racial theory to musicology with panegyrics to Wagner and Bruckner, and his interests remained primarily academic, as attested by his painstaking work in catalogueing the collection of musical manuscripts in the National Library of Vienna.

Lachs own compositions include eight masses, ten symphonies, twenty-five string quartets and a great deal of other instrumental music, but little of his music has been published beyond his songs, a genre in which he was no less prolific. His historiographical enthusiasms may now be freshly appreciated with this new recording of the sonatas he wrote for an instrument which was long obsolete even by the late 19th-century, the viola damore. The instruments noon came in the Baroque era: Biber, Scarlatti and Vivaldi all wrote sonatas, though as late as 1756, Leopold Mozart could remark that it sounds especially charming in the stillness of the evening.

Valerio Losito has demonstrated the particular qualities of the viola damore on two previous Brilliant Classics releases, of solo music from the Baroque period (94367) and sonatas by Scarlatti (94242). Lach, however, was composing in a richly Romantic idiom comparable with the late music of Brahms, and his three sonatas date from 1913-22, being thus doubly archaic in style. The album is completed with nine Lyric Pieces (1920-23) which explore Romantic moods and characters, as their titles reveal (Idylle, Humoreske, Romanze, Barcarole, Elegie, Cavatine, Legende, Ballade, Gavotte).