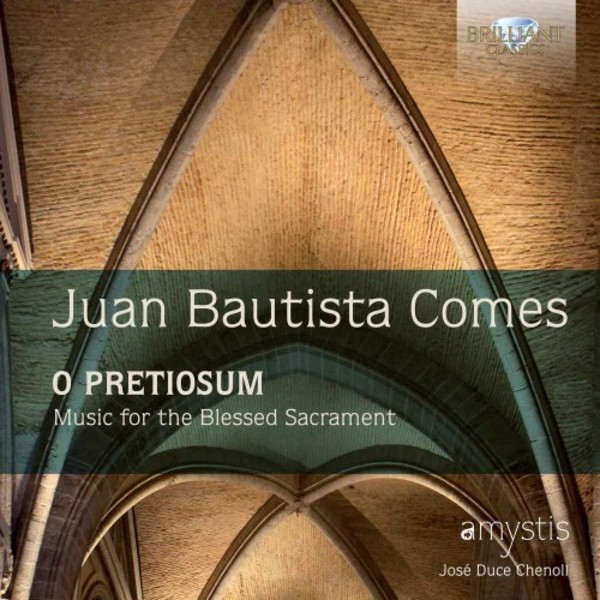 Juan Bautista Comes (Valencia, 1582-1643) was among the most significant composers of the early Spanish Baroque, whose life and music makes him a transitional figure between late-Renaissance style and the emerging techniques and tastes of the Baroque. He spent most of his life working in the city of his birth, Valencia, as a church musician and musical director at Corpus Christi School and Chapel (known as El Patriarca) and the Metropolitan Cathedral, as chapel master.

Over two hundred compositions survive, among them a 40-part Gloria and the 17-part Dixit Dominus for which he is now best known. In much of his work he transformed sacred texts into the more popular idiom of villancicos. These alternate bouncy, folk-like sections with more sober material in an unusual three-part structure.

Supplementing the villancicos here are four motets for the Feast of Corpus Christi, ornately worked pieces for double choir. A choir of high voices (S, A, T) provides one half of the dialogue and homophonic sections underline the solemnly expressive character of music always at the service of the text and the liturgy.

This is the second album on Brilliant Classics from Amystis, a Spanish early-music vocal ensemble and musicological society. The ensembles director José Duce Chenoll also prepares the performing editions of the music which they sing from long-overlooked manuscripts. The well-received debut album of Amystis focused on the sacred music of Juan Baptista José Cabanilles (94781) with fervently committed readings according to Nicholas Kenyon in the UKs Guardian newspaper. The singing and playing are delicate, the interpretations are as convincing as can be discerned from unfamiliar works of an obscure composer (Fanfare). Given the obscurity, rarity and musical value of the present release, it is also sure to attract reviews in major publications.