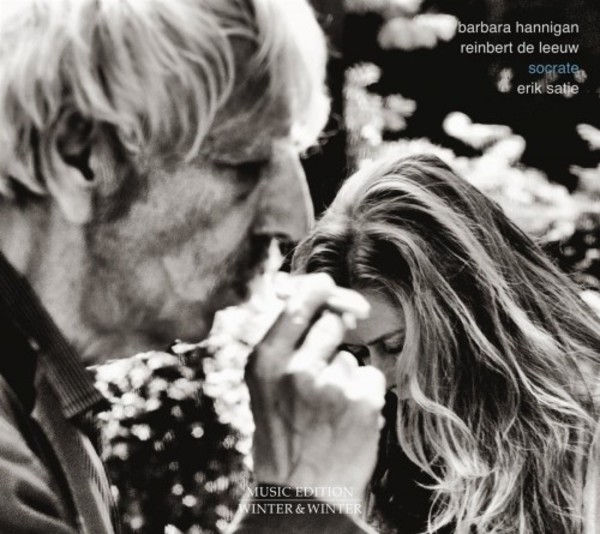 With 2016 being the 150th anniversary year of the birth of Erik Satie, Barbara Hannigan and Reinbert de Leeuw present with expressive intensity and in a unique way, the fascinating sound world of this leading French composer and pianist. Hannigan and de Leeuw let us discover and experience Saties almost forgotten and unique vocal compositions: Trois Mélodies, Trois Autres Mélodies and Hymne. The main work and title of the album is the composition Socrate comprising of three parts - Portrait de Socrate, Les Bords dIllissus and Mort de Socrate: music which sounds white, transparent and fragile.

If you are to buy just one Satie disc in this year celebrating the 150th anniversary of his birth, this should be it. Eschewing the temptation to throw in a few popular favourites, such as Je te veux or La diva de lEmpire, soprano Barbara Hannigan and pianist Reinbert de Leeuw have created a recital that goes much deeper into the refined essence of the composer. ... Hannigan and De Leeuw are mesmerising, casting a spell from the very first notes of the opening Les Anges that remains unbroken until the characteristically unexpected end of Socrate.  Christopher Dingle (Recording of the Month)
BBC Music Magazine August 2016

Throughout their album, Barbara Hannigan and Reinbert de Leeuw maintain a very noticeable consistency of mood, atmosphere and colour. The coolly detached house style of Winter & Winter has been respected but an aesthetic decision has clearly been taken to represent Satie as a creative lone wolf  as an early adopter of theories about harmonic narratives symbolising little apart from the sound of harmony itself which John Cage began to preach during the 1950s, a view that befits a label that has variously immersed itself in the compositional objectivity of Cage, Mauricio Kagel and, most recently, Hans Abrahamsen (and decides to put texts online rather than print them as part of the physical edition).  Philip Clark
Gramophone June 2016

In this, Erik Saties anniversary year, a number of recordings have been released. If you plan to buy just one, then I suggest you make it this one. Not only does it move away from the purely pianistic, offering instead a selection of the composers mélodies, but the beauty of the music making on this recording also deserves your attention. ... Barbara Hannigan proves to be one of the finest interpreters of this music, certainly the equal of the tenor Jean Belliard on Timpani (11020) and Mady Mesplé on Warner (9082564047963), while Reinbert de Leeuw proves that you do not need the chamber orchestra in Socrate. Indeed, the partnership between Hannigan and De Leeuw shows great intelligence and a true sense of ensemble that opens this music to a greater understanding.  Stuart Sillitoe (Recording of the Month)
MusicWeb International June 2016

Barbara Hannigan sings the songs of Erik Satie as if shes sitting next to you, whispering and cooing across the kitchen table with sufficient breathiness, soft edges and exquisite spaciousness to match Reinbert de Leeuws sweet-melancholy piano chords. ... In 1916, the Princesse de Polignac commissioned a melodrama based on Platos Dialogues and the composer obliged with this baffling setting of a fuddy-duddy translation by Victor Cousin. It was either an extreme manifestation of dadaist anti-sentimentality or Saties ultra-dry humour gone rogue; either way, Hannigan makes intimate confessionals of the plain text and archly non-eventful melodies, and clinches the art of enigmatic understatement.  Kate Molleson
The Guardian 6 May 2016