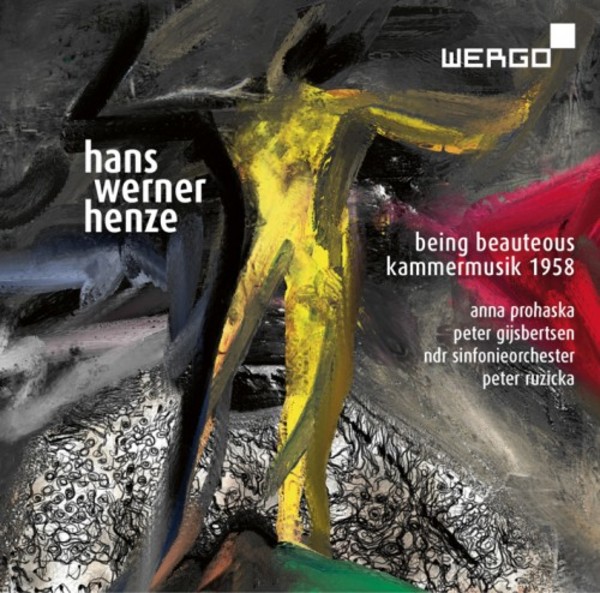 Being Beauteous
Kammermusik 1958, on the hymn 'In lieblicher Blaue'

Being Beauteous
Kammermusik 1958, on the hymn 'In lieblicher Blaue'

Hans Werner Henze, whose childhood and youth were darkened by his experiences of Nazism and war, became something of a legend during his own lifetime. Yet at the beginning of his career, he was considered an outsider in West German musical circles, although (or perhaps because?) he quickly became one of the most frequently performed contemporary composers. He was shunned by the musical avant-garde and was considered a traitor, an absolutely senseless accusation in his eyes. Henze seemed to follow an unwavering inner drive for compositional individuality.

Henze composed the cantata Being Beauteous, based on the prose poem of the same name by Arthur Rimbaud, in 1963, soon after returning from his first trip to the USA. In Manhattan and Harlem, the composer experienced contrasts of wealth and poverty. Henze felt that his experiences in New York  the danger to life and the challenge to the classical ideal of beauty posed by the conflict between abundance and decay  had been anticipated in Rimbauds poem, which comes from the cycle Les Illuminations. In this composition of mine, the poetry is treated as though each of its thoughts were a small aria in itself. These arias are framed by short violoncello quartets into which the harp is entwined. Whereas each aria has an autonomous form, the instrumental quintet sections are interrelated - they are variations of one another. (Henze)

Henze was inspired by a number of experiences to write Kammermusik 1958 - über die Hymne In lieblicher Bläue von Friedrich Hölderlin. He made numerous sketches during a trip to Greece in the summer of 1958, a time when his affinity for the Mediterranean landscape and culture merged with Hölderlins idealization of classical antiquity. In Henzes words, Everything was as though myths had been born only yesterday. The stones began to sing. The recording of Kammermusik 1958 is the first recording of the string orchestra version.

This brings together two of Hans Werner Henzes most rapturously lyrical works, both completed in the same year, 1963. Being Beauteous is a 15-minute cantata for coloratura soprano, harp and four cellos, setting Rimbauds poem of the same name from his cycle Les Illuminations, and surrounds the spiralling, helium-high soprano lines with velvety cello harmonies and delicate harp adornments. Soprano Anna Prohaska captures its strange, fragile, ecstatic quality perfectly.  Lasting almost 50 minutes, Kammermusik is a much more substantial work than the Rimbaud setting, more musically intricate and perhaps less overtly expressive, too, but its one of Henzes finest, most personal achievements, and superbly played and sung.  Andrew Clements
The Guardian 24 June 2016