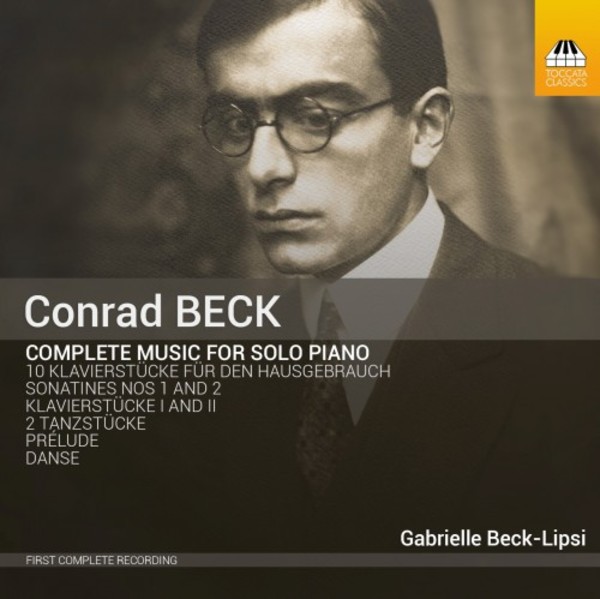 This CD shines light on a major twentieth-century composer whose music has been almost entirely forgotten since his death.

The Swiss composer Conrad Beck (190189) wrote a generous amount of music, including seven symphonies, around twenty concertos and concertante works, four string quartets, some large-scale choral works, solo songs and much else, and during his lifetime he enjoyed the strong support of Paul Sacher.

This first recording of his complete piano music reveals a style similar to that of Hindemith and Honegger, with clear contrapuntal textures in a neoclassical tradition ultimately derived from Bach  and with a hint of the French accent his music acquired from the years he spent in 1920s Paris.

This recording has been made by Becks daughter-in-law, Gabrielle Beck-Lipsi, who studied the music with the composer, thus giving it the seal of authenticity.

Gabrielle Beck-Lipsi (born in Zurich in 1941) is the daughter of the Parisian sculptor Morice Lipsi and the Swiss painter Hildegard Weber-Lipsi and the wife of Hans Jacob Beck, son of Conrad Beck. She studied piano at the Conservatoire National Supérieur de Musique and the École Normale in Paris (195862) with Vlado Perlemuter, Marcel Ciampi and Ina Marica. Then, for almost thirty years, she worked as a photographer and for other cultural projects. It was only in 1996 that she returned to the piano  but with more enthusiasm than ever. She then began to perform in various European countries and has recorded mainly impressionist and modern music.