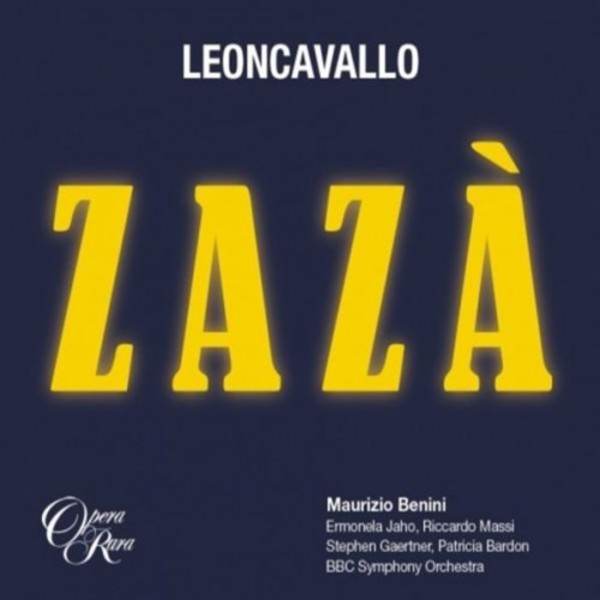 Zazà is Opera Raras first recording venture into the musical world of Leoncavallo and the operatic tradition of verismo. Maurizio Benini leads the BBC Symphony Orchestra and Ermonela Jaho in her recording debut as the eponymous Zazà. Jaho is joined by Riccardo Massis as her lover Milio; Stephen Gaertner as her onstage partner and former lover Cascart, and Patricia Bardon as her mother Anaide.

Written in 1900 for the Teatro Liricio di Milano and conducted at its première by Toscanini, Zazà was Leoncavallos most popular opera after Pagliacci. In the 20 years following its première, Zazà received over 50 new productions in opera houses around the world. Opera Raras revival of Zazà is based on Leoncavallos own 1919 revision of his score which has been carefully researched by Maurizio Benini.

... this lavish new recording of Zazà is very welcome, exhibiting all the usual hallmarks of care and attention weve come to expect from the label. The work itself is fascinating, too, dating from the early part of Leoncavallos difficult post-Pagliacci career. ... Maurizio Benini conducts with an easy feel for the scores shifting moods, and the BBC Symphony Orchestra play with real charm and affection. Fascinating, and recommended: its difficult to imagine a better case ever being made for this delightful, touching piece on disc.  Hugo Shirley
Gramophone July 2016

Opera Rara here makes a plea for Leoncavallo, composer of Pagliacci, to stop being considered a one-hit wonder. His Zazà joins Puccinis Tosca, also premiered in 1900, in an operatic subgenre of Italian works whose heroines are themselves sopranos  one rank above the tart with a heart. In the concert last autumn, after which this studio recording was made, Ermonela Jaho gave a dazzling performance as Zazà, an initially flighty music hall singer.  On disc Jaho is just as good, and Zazàs character comes through vividly. A strong supporting cast includes Riccardo Massi as the dastardly tenor lover, Stephen Gaertner as the dependable ex and Patricia Bardon as the boozy mother. Maurizio Beninis pacy conducting makes the BBCSO sound stylish and sumptuous.  Erica Jeal
The Guardian 10 June 2016