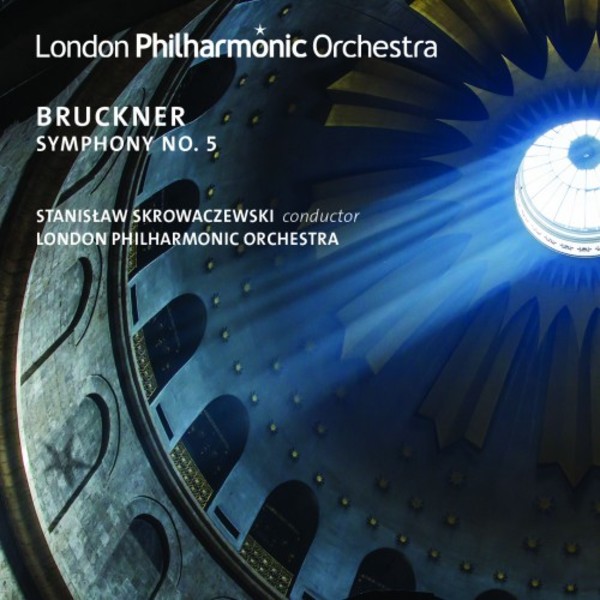 Throughout this impressive account there was a strong and palpable connection between maestro and musicians. -  Classical Source, November 2015

This live concert recording features renowned Bruckner expert Stanisław Skrowaczewski, who commands a rare position within the international musical scene, being both a renowned conductor and a highly-regarded composer.

This recording is an interpretation of humility from nonagenarian Stanisław Skrowaczewski, a performance in which the listener can hear the remarkable connection between conductor and the London Philharmonic Orchestra; the orchestra has performed Bruckners symphonies under his baton many times.

Anton Bruckners Fifth Symphony is one of the grandest of his so-called cathedrals in sound. From the first movements monumental tone, via the beautiful yet enigmatic Adagio and the dance-haunted Scherzo, Bruckners fantastic Fifth ends with a triumphant orchestral finale, among the finest ever written.

Skrowaczewskis interpretation of Bruckners Symphony No.3 with the LPO is also available on the LPOs record label (LPO0084). Released in 2015, the recording received excellent reviews, with BBC Radio 3 commenting that it sounds throughout as if the LPO is completely in sympathy with the conductors carefully controlled approach ... It feels right, end to end.

This recording was taken from a live concert performance at the Southbank Centres Royal Festival Hall on Saturday 31 October 2015.

Bruckners Fifth is at once the most compelling and the most forbidding of all his symphonies. Its moments of blazing glory have a severe grandeur about them, chorales and counterpoint rub shoulders, and popular dances contrast with passages of sublime lyricism: this is music of extremes. It takes a seasoned hand at the tiller to guide the orchestra and listener through its waters, and the greatest performances have been those by conductors of long experience in this repertoire: Schuricht, Klemperer, Horenstein, Jochum, Wand and, in his final years, Abbado.

Stanisław Skrowaczewski, now comfortably into his tenth decade, is eminently qualified to join such an elite band, and this live performance with the London Philharmonic Orchestra, recorded on 31 October 2015 at the Royal Festival Hall, is a richly rewarding one. Skrowaczewski famously recorded a complete cycle of the Bruckner symphonies (all eleven of them, including the early nos.00 and 0) with the Saarbrücken Radio Symphony Orchestra in the 1990s and early 2000s, when he was a mere whippersnapper in his 70s. It originally appeared on the Arte Nova label, and is now on Oehms Classics (OC025, also available separately). That cycle established him as a no-nonsense Brucknerian of considerable integrity, with steady tempi, a constant pulse through the faster movements, and broad speeds in the great Adagios. Those qualities are evident in this live recording too, and throughout it bespeaks long and valuable experience. Its a measured reading but, unlike Celibidaches Munich recording, not perversely so. In fact, timings are similar to Abbados 2011 Lucerne account, although where the Lucerne Festival Orchestra offered ultra-refined playing, the LPO are earthy and craggy, with expressive honesty very much a hallmark. Skrowaczewskis own earlier recording was a tangy affair, strongly flavoured by the forthright Saarbrücken brass, but this latest one has a more granitic feel in the Klemperer mould.

After an imposing slow introduction, the main Allegro is strongly purposeful, with subtle tempo variations finely judged. Textures are clear without being effete (helped by the demi-sec recording), so that the many contrapuntal intricacies (short motifs appearing simultaneously in normal and inverted form) come across vividly. The orchestral sound is grainy and well-weighted, and Skrowaczewski clearly understands Bruckners organ-like registral use of dynamics. The Adagio second movement is marked Sehr langsam, and the conductor takes the composer at his word, the main theme austere yet stately, the richly-scored second theme ideally noble. A sense of the strings tugging ever so slightly to go at a faster tempo enhances the feeling of a live experience (though it should be mentioned that the audience are well-behaved throughout).

The Scherzo starts with a speeded-up version of the Adagios triplet accompaniment, Skrowaczewski launching into it with a vengeance, with barely a pause for breath: the effect is truly thrilling. There have been warmer accounts of the slower, Ländler-like episodes (the Ländler being a bucolic cousin to the more sophisticated waltz), but the slightly astringent feel is entirely of a piece with the reading as a whole, and completely convincing. Its all crowned with a wonderfully resolute performance of the great Finale, where strands from the previous movements are recalled only to be mocked by a cheeky clarinet, before embarking on one of the greatest of symphonic journeys. Themes, counter-themes, fugues and chorales all sit perfectly in place, in a movement that, for the inexperienced, can be perilous in the extreme. No danger of that here. When the final pages heave into view, theres a feeling of glorious inevitability and thoroughly earned triumph, with rays of brilliant light shining down (as suggested by the cover artwork!). At the climactic reappearance of the chorale theme, Skrowaczewski transposes the trumpet part up an octave (a traditional and highly effective retouching of Bruckners scoring) but, like Abbado yet very few others, he makes sure that the flute line leading into the last page comes across loud and clear. Its a splendid ending to a great performance, and a fine addition to the same teams accounts of the Third and Seventh symphonies. Brucknerians need not hesitate: long may Skrowaczewskis marvellous Indian summer continue!