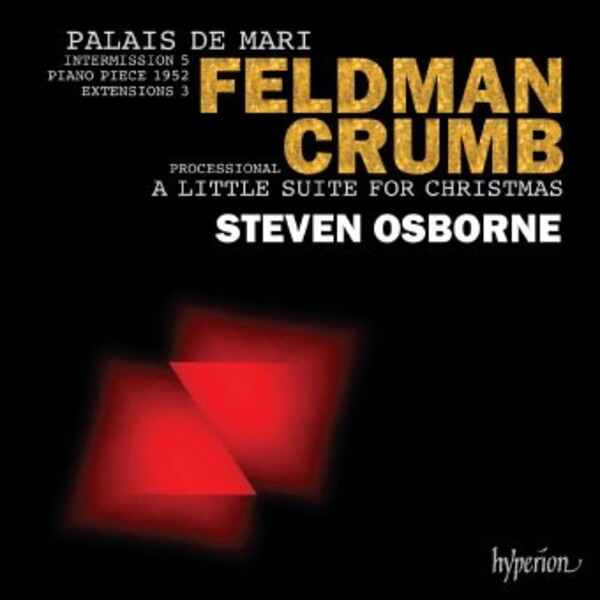 The extraordinary soundscapes conjured by Morton Feldman and George Crumb are like nothing else in the whole of twentieth-century music. Steven Osborne is the most sympathetic of guides to these rarefied worlds.

Pianist Steven Osborne brings together an unlikely pairing of two American composers, each of whose music is more often encountered on specialist new music labels. That it succeeds so triumphantly is not just down to Osbornes extraordinary playing, but also to the surprising complementarity of the works gathered here. Morton Feldman, who died in 1987, would have been 90 this year; his music, influenced more by the abstract paintings of the New York School (Pollock, Rothko and Philip Guston among them) than by any compositional models, is marked by a disturbing (and only occasionally disturbed) quiet and, in later works, by extreme timescales, with a musical language that defies systematisation. George Crumb (born in 1929), meanwhile, crafts pieces in a more tonally-based idiom, but with a mastery of gesture that has one thinking of Janáček, and of timbre that evokes Debussy and particularly Messiaen.

The first part of this disc concentrates on shorter works by both composers: three from early in Feldmans career (1952), all conventionally notated but far from conventional in sound; and Crumbs 1983 experiment in harmonic chemistry, Processional. The shortest of the Feldman items, Piano Piece 1952, is in some ways the most extreme and certainly the most sparse, with an unvarying pulse and left and right hands playing in strict alternation, just one note at a time. Nor are there any discernible pitch patterns to offer the listener a safe haven in memory: the effect is unsettling but enthralling. Intermission 5 exhibits extraordinary nuances of colour, slow and for the most part extremely quiet, save for four very loud chords in the first half; with the sustaining pedal held down for the entire duration, sympathetic vibrations play a large part in the soundscape. Extensions 3 makes telling use of the repetition so studiously avoided in Piano Piece, its insistent softness stretching the listeners ears to their limits.

Crumbs Processional uses Debussy-like modal and whole-tone material, and its pulsating drones and two dramatically alternating sections lend the work a noble progression and architecture that contrasts highly effectively with the flat planes of Feldmans music.

As hinted at by the covers typefaces, the main works here are Crumbs A Little Suite for Christmas, A.D. 1979 (1980) and Feldmans Palais de Mari (1986)  his last work for solo piano. Both have links to artworks: the Crumb to Giottos frescoes of the life of Christ (specifically the Nativity) in the Scrovegni Chapel, Padua; the Feldman to a picture in the Louvre of the ruins of the ancient Babylonian Palace of Mari. Of the two, the Crumb is by far the more illustrative, using extended techniques to create, for instance, an oriental feel for the Adoration of the Magi and a percussive tolling in the Carol of the Bells. In the Canticle of the Holy Night, the pianist strums the piano strings like a harp to pick out a quotation from the sixteenth-century Coventry Carol, while the first and last movements have flourishes that could come straight out of Messiaen.

Palais de Mari is the longest work on the disc, reflecting Feldmans late interest in imperfect symmetries, with minutely varied repetitions and a brilliantly sustained quietness together creating a slow-shifting introspection with a marvellous shimmering quality to it. It makes for a wondrously still yet constantly searching close to the programme.

Hyperions recording captures every nuance of these acoustically extreme works, and Osbornes playing is matchless: alert yet incredibly poised and immaculately weighted. There is a very useful set of detailed notes by Steven Bruns, who is writing a book on George Crumb, and the presentation is handsome. For lovers of penetrating and beguiling pianism, this is an absolute must.

This is a pianist whose recent solo discs have featured music by Schubert and Mussorgsky, and he brings something of their singing and robust tones even to the most hushed and abstract of Feldmans lines. In his interpretation of the George Crumb pieces (the noble 1983 piece Processional, the strummed strings and bell-like sounds of A Little Suite for Christmas), what comes to mind is the sumptuous grandeur of Osbornes towering 2002 recording of Messiaens Vingt Regards sur lEnfant-Jésus: mystical yet grounded, muscular yet ecstatic.  Kate Molleson
The Guardian 20 May 2016

... the essential differences in style remain: even their harmonic worlds appear complementary, Feldmans recalling the chiming chords of Schoenbergs piano piece Sehr langsam, while Crumbs mingling of bell and gamelan-like sounds is more akin to Debussy. Osborne fully demonstrates his versatility in revealing the colours of Crumb, and in the zen-like patience with which he unfolds each of Feldmans works.  Daniel Jaffé
BBC Music Magazine August 2016