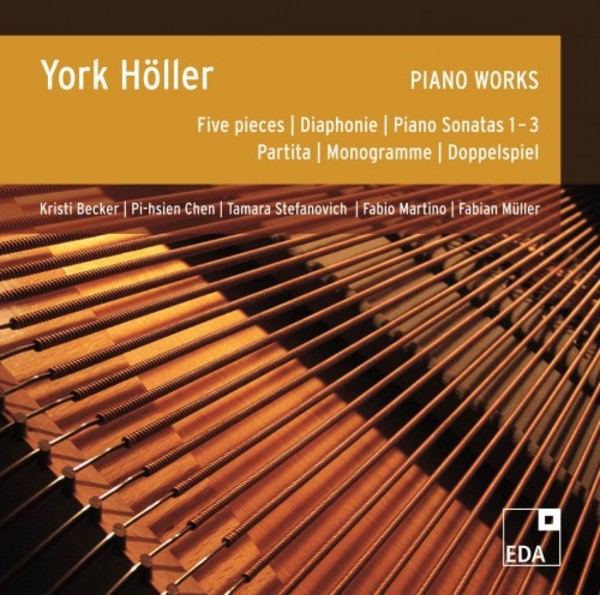 The special role that the piano takes in York Höllers oeuvre is the result of his life story. As a sixteen‐year-old aspiring pianist, he made his debut with one of his own compositions. He supplemented his composition studies under Bernd Alois Zimmermann at the Cologne College of Music with postgraduate piano studies under Alfons Kontarsky, one of the most important interpreters of the avant‐garde during the second half of the twentieth century, and to whom he dedicated his First Piano Sonata. The works written between 1964 and 2012 for this instrument not only mark important stages of York Höllers compositional development, but they also reveal his fundamental interest in  and knowledge of  the playing characteristics of the instrument, which have a direct influence on the structure and facture of the writing: York Höllers piano works are genuine keyboard music in the tradition of the important piano composers of the past, from Beethoven through Chopin and Liszt to Debussy, Ravel, and Bartók.

After a comprehensive overview of the piano oeuvre of the Cologne‐resident Krzysztof Meyer (EDA36, Christian Seibert), EDA records devotes itself again to the piano works of an important contemporary composer, which are presented nearly complete on this double CD. This is a compilation of recordings that have already appeared in various other places. The piano works that were composed between 1968 and 1996 (5 Pieces for Piano, Diaphonie, the First and Second Piano Sonatas, the Partita) were issued in 2003 by CPO but have long been out of print. The Third Piano Sonata is from Fabio Martinos debut CD (Oehms Classics, 2013), which was produced in 2011 following his first prize at the Competition of the Kulturkreises der deutschen Wirtschaft. Monogramme and Doppelspiel, which were both premiered at the Ruhr Piano Festival, were released in 2005 and 2012 within the framework of the respective festival documentation. A historical recording from 1965 of the last of the 5 Piano Pieces, which shows the composers exquisite pianistic skills, completes the circle of this fascinating pianistic oeuvre created over the period of nearly a half a century.