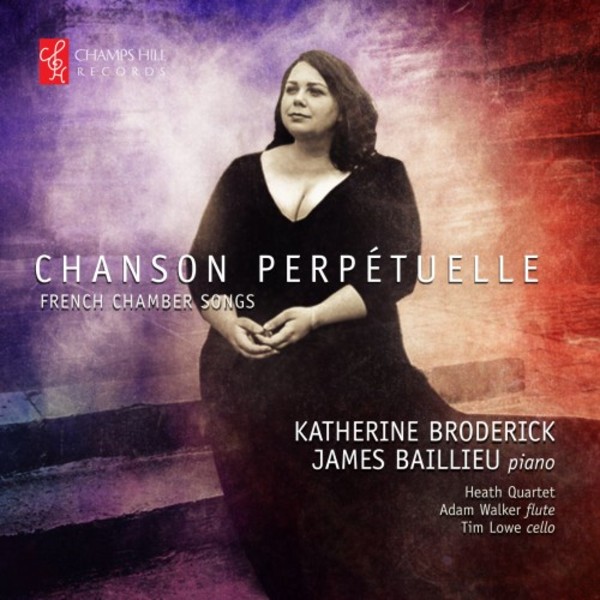 Soprano Katherine Broderick joins instrumentalists including pianist James Baillieu, flautist Adam Walker, cellist Tim Lowe and the Heath Quartet in a new recording of French chamber songs.
Drawn from the late 19th and early 20th centuries, the repertoire draws together works by some of the finest French composers of the era, featuring pieces by Gaubert, Berlioz, Ravel, Caplet, Debussy, Saint-Saëns and Chausson.
Broderick introduces the collection with her own thoughts on the connection between singer and pianist, and the joys of including more players in this collaboration : There is an indefinable communication between a singer and pianist in the medium of song. It is quite intimate and, I like to imagine, something akin to telepathy. It is a really exciting experience to add more players into the mix. I always relish the chance to sing with chamber musicians. Its the closest Ill come to knowing the interdependency of the dynamics between players in a string quartet.
Currently an ENO Harwood Artist, Katherine Broderick has a flourishing career in opera, concert and recital, and was the winner of the 2007 Kathleen Ferrier Award. In demand at opera houses in the UK and Europe, her stage repertoire encompasses Wagner, Verdi, Mozart and Britten.
This recording follows her 2012 Champs Hill release of Lieder for the Turn of a Century (CHRCD046) with Malcolm Martineau, described as ...beautifully shaped and superbly sung... by BBC Radio 3 and by Gramophone as ... a judicious mix of not-too-brash bravado and playful sensuality makes this performance just the ticket.

Capable of big Wagnerian roles (she has sung Brünnhilde) as well as Richard Strauss and Tchaikovsky, Katherine Broderick here turns her attention to intimate French songs with string quartet, flute or cello as well as piano. Her powers of expression, so vivid and telling on stage, communicate well in this rewarding recital disc of Gaubert, Berlioz, Debussy, Saint-Saëns, Chausson and Caplet.  Broderick turns every song into a miniature drama, delivered with elegance of line, sensuality and sharp wit, well supported by her excellent colleagues.  Fiona Maddocks
The Observer 9 October 2016