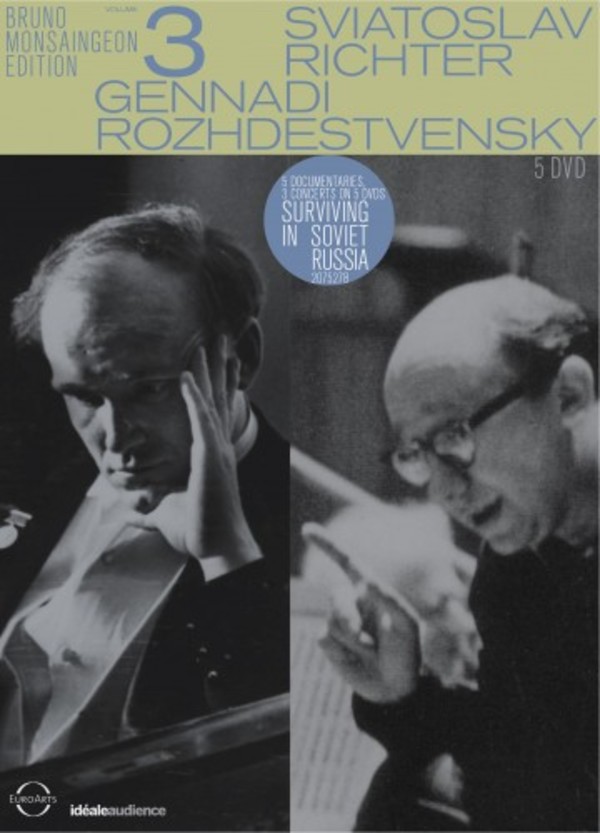 How did artists survive in the Soviet Union? How tricky did they have to be in the face of authorities? What kind of danger and difficulties did they have to fear? Sviatoslav Richter and Gennady Rozhdestvensky talk about authorities, watchdogs and the political system in the former Soviet Union. As a bonus, the release includes a recording of Richter playing Mozarts Piano Concerto no.9 in E flat major, K271, in 1966 which has never been released on DVD before.

 The Russian Edition: Various documentaries by Bruno Monsaingeon, one of the most renowned directors of music documentaries of our time, presented in one box:

 Conversations with Gennadi Rozhdestvensky: This four-hour documentary forms the heart of this new edition: Abstruse. Reflective. Facetious. A wittily-narrated journey through the soviet history in politics and music. With the former Soviet Union moving ever further into the past each year, first hand witness accounts such as his become ever more valuable. Documentary from 2015.

 Richter. The Enigma: A real cult film for piano enthusiasts! Award-winning documentary about one of the greatest pianists of the 20th century who lived in Russia and survived the dictatorship.

 The Red Baton: Scenes from the musical life of Soviet Russia. Documentary made in 2003

 Gennadi Rozhdestvensky: Conductor or Conjurer? Documentary made in 2003

 Bonus: Andrei Chesnokov. Profile of a Player: from the socialist farmers and workers state to the top ten of the world. Living as a professional in the USSR. Documentary from 1989.