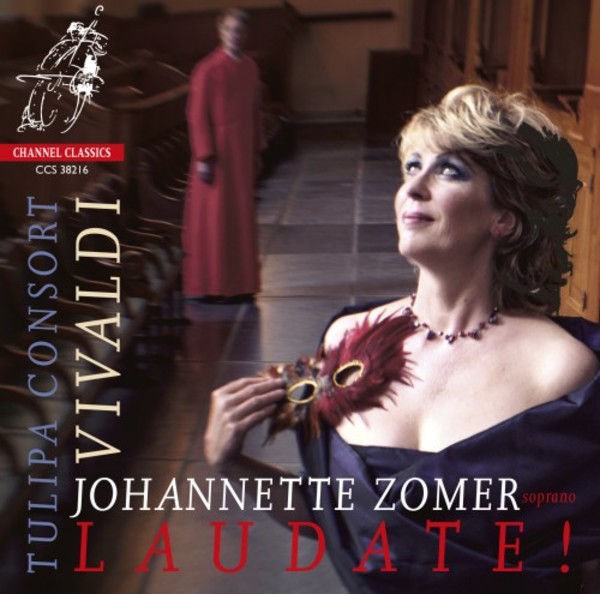 For the first CD by the Tulipa Consort I have chosen sacred music by Antonio Vivaldi. The idea occured to me several years ago when I sang his Laudate pueri in Montreal with the cellist Jaap ter Linden. I was moved and impressed by the diversity of this work. Vivaldi is too often associated only with the Four Seasons and the Gloria, while there is so much more. This soon became apparent when I began to compile a programme around Laudate pueri: the somewhat slower pieces in particular, such as the second movement of Laudate pueri, Sit nomen Domine and the second aria from RV 631 Rosa quae moritur, proved to possess great depth and beauty. And we simply had to include the lively Ascende Laeta, which bubbles and foams with joy. I hope you will enjoy listening to this repertoire just as much as we, the Tulipa Consort, have enjoyed performing it. - Johannette Zomer

The Dutch soprano Johannette Zomer began her studies at the Sweelinck Conservatorium Amsterdam in 1990 with Charles van Tassel, after having worked as a microbiology analyst for several years. In June 1997 she was awarded her Performance Diploma. Since then she has received coaching by Diane Forlano (London), Claudia Visca (Wuppertal) and Marlena Malas (New York). Her repertoire ranges from medieval music through all music of the baroque and classical eras, including opera, but also Lieder, French Romanticism and Contemporary music. Johannettes concert appearances are also many and various.

Several years ago Johannette Zomer founded her own ensemble, the Tulipa Consort: Working with my own ensemble has given me artistic freedom from the very beginning, for by selecting my own repertoire and musicians I feel entirely at home in the music, which greatly benefits the performance.