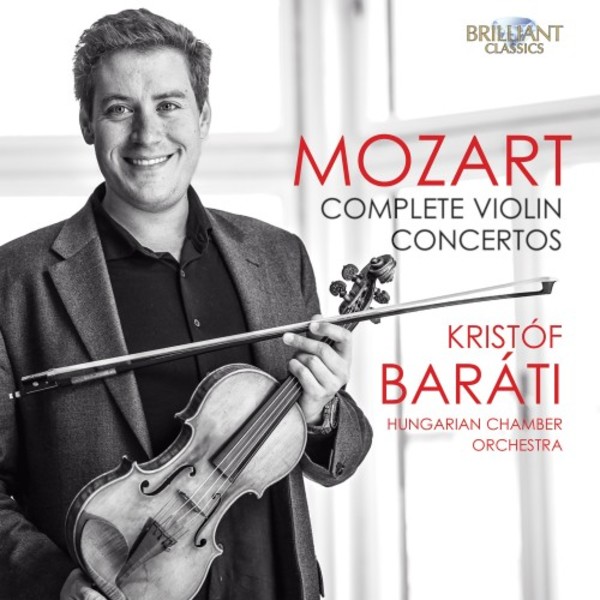 Following previous successful albums, acclaimed Hungarian violinist Kristóf Baráti returns to Brilliant Classics to make his stamp on the Violin Concertos of Mozart. Praised for his strong, penetrating and brilliant tone and his consistently serious, almost dramatic interpretation of Ysaÿes solo sonatas (BC94678), Baráti has emerged as one of the most important violinists of his generation, having previously performed with internationally renowned orchestras including the Royal Philharmonic Orchestra and Deutsches Symphonie Orchester, and with conductors Kurt Masur and Charles Dutoit. This album was specially recorded in Hungarys premier concert venue, the Kodály Center in Pécs, on Barátis violin, the Lady Harmsworth Stradivarius, kindly on loan from the Stradivarius Society of Chicago.

Here, Baráti turns his attention to Mozart for the first time. Leading the Hungarian Chamber Orchestra from the front, Baráti expertly tackles all five concertos known to be by Mozart, as well as the two Rondos and Adagio that together make up all of the composers music for solo violin and orchestra. All the concertos (except K207, which has been dated to 1773) were composed in 1775 in a flurry of activity. Despite this, they document a strong development of Mozarts mastery of the form; from the fairly staid sonata form of the last movement of the first concerto, to the more radical decisions the composer was taking in his K218, where he boldly decides not to restate the opening fanfare theme of the exposition in the development, instead weaving it into the second and third movements, expertly tying the piece together. Mozart stopped composing violin concertos as abruptly as he had begun; although he still performed his works for a few years afterwards, he seemed to lose interest in composing for the violin. Nevertheless, the five outstanding concertos he has left us with represent an outburst of Mozarts creativity and the astonishing rapidity with which he honed his technique over just a few months.