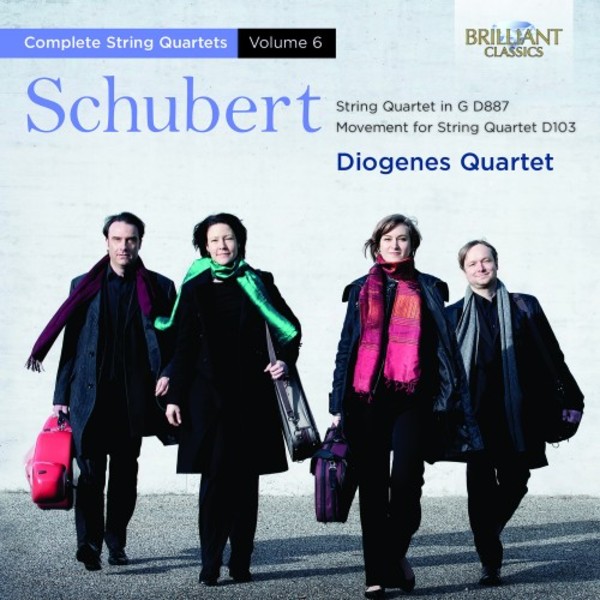 This release represents the final volume of the Diogenes Quartets integral recording of Schuberts string quartets, spanning not only the composers well‐known works but also the incomplete fragments, carefully reconstructed by Christian Starke.

Schuberts Quartet in G, D887 came after the success of Death and the Maiden and the Rosamunde Quartet. It was his final work for string quartet; despite this, he struggled to get it published, and it was only performed for the first time posthumously. Even then, the quartet was not always well received, perhaps because it represented a departure from Schuberts usual way of working with thematic material: for the first time, the theme in the first movement remains melodically the same, with the composer instead dramatically shifting the harmonic colouring underneath, allowing the theme to be revealed in different musical forms. While the slow second movement seems to follow a more traditional structure at first, it is soon interrupted with startling violent outbursts. The final movement is perhaps the most modern, as the individual voices tumble over each other in furious counterpoint, with barely a single note fulfilling a purely accompanying role.

Unlike the D887 quartet  one of Schuberts most modern  the fragmentary movement D103 is one of the composers early works, probably started in 1814. Christian Starkes completion features an additional transition in the reprise, which now begins with the opening gesture of the Allegro section, and allows the three expansive themes to be presented in a meaningful form.

The Diogenes Quartet are pleased to round off their complete recording of Schuberts String Quartets, which represent years of careful musicianship and performances of the highest quality. The complete boxset is also available to buy (BC94468) and is the perfect addition to anyone wishing to fully explore the pleasing variety of Schuberts music for quartet, which spanned his entire career.