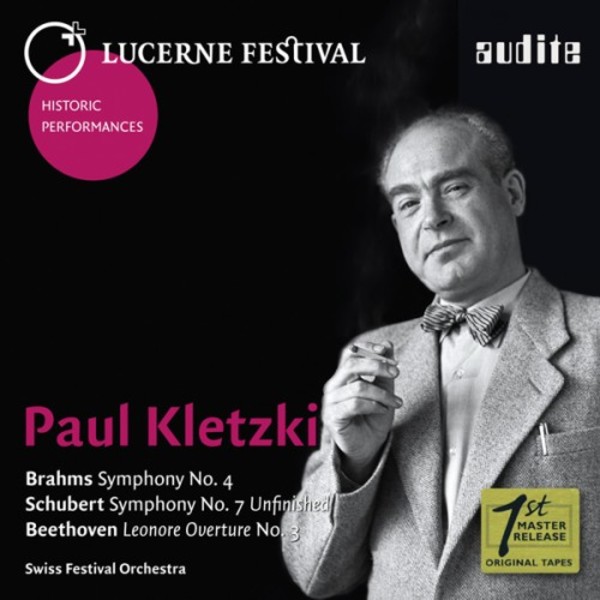 A rediscovery of a master: a leading podium star during his lifetime, Paul Kletzki, born Pawel Klecki in the Polish city of Łódź on 21 March 1900, nowadays is considered an insiders tip among connoisseurs.

Volume 9 in the Lucerne Festival Historic Performances series presents a live recording from the summer of 1946 as a first release. It shows Kletzki at the height of his art: on the podium of the Swiss Festival Orchestra he realises exciting interpretations of Brahmss Fourth Symphony, Schuberts Unfinished and Beethovens Leonore Overture No.3  expressive and with a stupendous sense of musical architecture.

Paul Kletzki fled as many as three totalitarian regimes  initially Nazi Germany, where he had established himself as a composer and conductor since the 1920s, and where Wilhelm Furtwängler had championed him; later on, Stalins Soviet Union; and finally fascist Italy  before settling in Switzerland in 1939. Here, he became a regular guest at the Internationale Musikfestwochen Luzern, todays Lucerne Festival, and began his international career which led him to work with all the important orchestras, whilst he also became chief conductor of the symphony orchestras at Liverpool, Dallas, Bern, as well (as Ernest Ansermets successor) as the Orchestre de la Suisse Romande.

This live recording documents a charity concert which Kletzki conducted following studio recordings made in Lucerne for EMI: the first ever recording made by a Swiss orchestra for the international record market. The Neue Zürcher Zeitung wrote about Kletzkis performance that the works [] were interpreted with a brilliant perfection of intellectual excitement and spiritual fulfilment as it is to be experienced only extremely rarely. This live recording from 1946 is one of the oldest recordings in the Audite catalogue. It is based on the original recording which was made using acetate discs, each with a duration of about 4 minutes. Despite their old age and the particular technical challenges presented by the remastering process, Kletzkis impressive dynamics have been fully preserved. In cooperation with Audite, Lucerne Festival presents outstanding concert recordings of artists who have shaped the festival throughout its history.

The aim of this CD edition is to rediscover treasures  most of which have not been released previously  from the first six decades of the festival, which was founded in 1938 with a special gala concert conducted by Arturo Toscanini. These recordings have been made available by the archives of SRF Swiss Radio and Television, which has broadcast the Lucerne concerts from the outset. Carefully remastered and supplemented with photos and materials from the Lucerne Festival archive, they represent a sonic history of the festival.