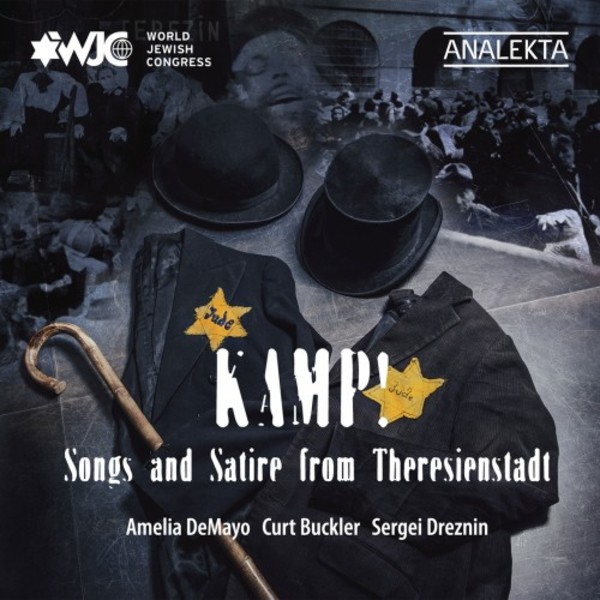 Kamp! Songs and Satire from Theresienstadt

Theresienstadt, or Terezín, was built as an impressive fortress by the Austrian Empress Maria Teresa to solidify the Hapsburgs hold on Bohemia. It later proved a bulwark in their defense against Napoleon. In 1941, the Nazis decided to turn the fortress into a transit camp for Jews from the German-occupied Czech lands.

Prisoners were housed in cramped basements, attics, barns and courtyards. The lack of food or decent sanitation led to outbreaks of typhus and dysentery. Always, there was the terror of transport to the death camps. In the midst of these intolerable conditions, the celebrity prisoners did what they did best: entertain. In attics and basements, at first in strict secrecy, some of Europes most famous cabaret stars, with the help of their fellow internees, wrote and performed satires about captors and inmates alike.

Before long, the Nazis incorporated this extraordinary artistic effort into their propaganda machine. They distributed musical instruments they had confiscated not long before. An orchestra and a jazz band, the Ghetto Swingers, were formed.

In October 1992, the story Chansons und Satiren aus Theresienstadt, was made into a tragic but also ironic production for three performers  man, woman and pianist. Sergei Dreznin, a Russian Jewish pianist and composer living in Vienna, was the musical director of that show, and also the composer of many of the melodies and satirical cabaret numbers. Gerhard Bronner, the patriarch of Vienna cabaret, contributed several other remarkable songs. All the lyrics, poems and most of the music of the songs from this production were written, adapted and performed by the inmates of Theresienstadt In 1942-44. The versions on this recording are English translations of those texts and poems.