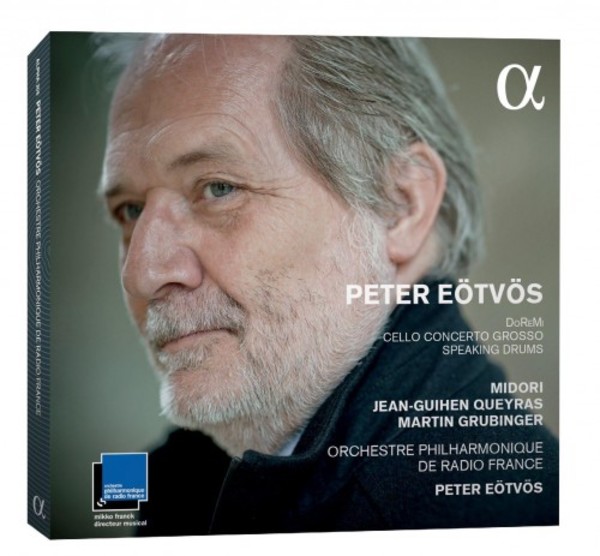 In November 2014, Radio France inaugurated its new auditorium with a programme giving carte blanche to one of the most eminent composers of our time, Peter Eötvös, who was then celebrating his seventieth birthday. On this occasion, three of his concertos were given their world premiere recordings under his direction with three soloists of the front rank. The violin concerto DoReMi, played here by its dedicatee Midori, is followed by Cello Concerto Grosso, a triangular dialogue between the solo cello, the cello section, and the full orchestra. The spectacular Speaking Drums concludes the programme on a highpoint: the orchestra (around forty musicians) prolongs the performance  theatrical as much as musical  of the percussionist, who declaims texts by the poets Sándor Weöres (in Hungarian) and Jayadeva (in Sanskrit) and moves from point to point on the platform, thus creating links with various instruments of the orchestra. The stunning Martin Grubinger lends his voice and his percussion playing to this piece, which ends in highly virtuosic polyrhythm.

most effective in the violin work DoReMi, which seems perfectly tailored to the brilliance of Midoris playing, and in the sheer theatricality and almost improvisatory quality of Talking Drums, in which Grubinger has to deliver fragments of poems by Sándor Weöres and a Sanskrit text by the Indian poet Jayadeva, as well as playing a wide range of tuned and untuned instruments.  Andrew Clements
The Guardian 6 May 2016

Cello Concerto Grosso (2011) is a work of taut cogency and rhythmic drive, the soloist embedded in an eight-strong cello section. ... Jean-Guihen Queyras brings verve and eloquence to the dramatic soliloquy of the second movement, and plays athlete and clown in a finale of irresistible wit and imagination. DoReMi (2012), a tribute to Midori, finds her on feisty form. Its characterised by a spangling transparency, from its three-triangle opening, to the rapt cadenza underpinned by low viola deons.  Helen Wallace
BBC Music Magazine September 2016