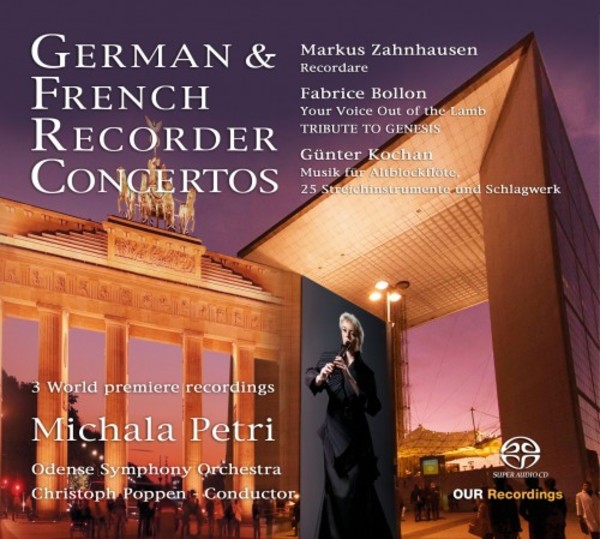 Your Voice Out of the Lamb for recorders and small orchestra

Your Voice Out of the Lamb for recorders and small orchestra

Banished for decades from the concert hall, the recorder once again came to the fore in the 20th century with the revival of early music. Germany and England were particularly welcoming of the recorders return to the brotherhood of instruments. Owing to its deliberate opposition to the grand, Romantic tradition, the recorder found favor among a highly diverse group of German composers representing an equally diverse range of styles ranging from Expressionism, Neue Sachlichkeit, and Neo-Classicism to self-consciously folk-inspired and faux Renaissance works.

Over the past decade, Michala Petri has engaged in an ambitious campaign to further extend the recorders presence as a thoroughly modern instrument capable of playing contemporary concertos. Numerous new compositions have been commissioned including works by composers from the US, Spain, China, England, Sweden, Denmark and the Faroe Islands. For this fourth installment in her contemporary Concertos project, Michala Petri has recorded the world premieres of works by composers from France, the former state of East Germany and modern Germany.

Acclaimed conductor Fabrice Bollon contributes Your Voice Out of the Lamb, an epic, genre-busting tone poem inspired by one of the greatest Rock concept albums of all time, The Lamb Lies Down on Broadway by Genesis. The late East German composer Günter Kochan is represented by his bracing Music for alto recorder, 25 string instruments and percussion. Also included is Markus Zahnhausens Recordare, a veritable Concerto da Requiem for solo recorder and orchestra.

Michala Petri is joined on this musical adventure by the Odense Symphony Orchestra under the able direction of Christoph Poppen, and they prove themselves to be stylistic chameleons more than equal to the challenge of these surprising and challenging scores.