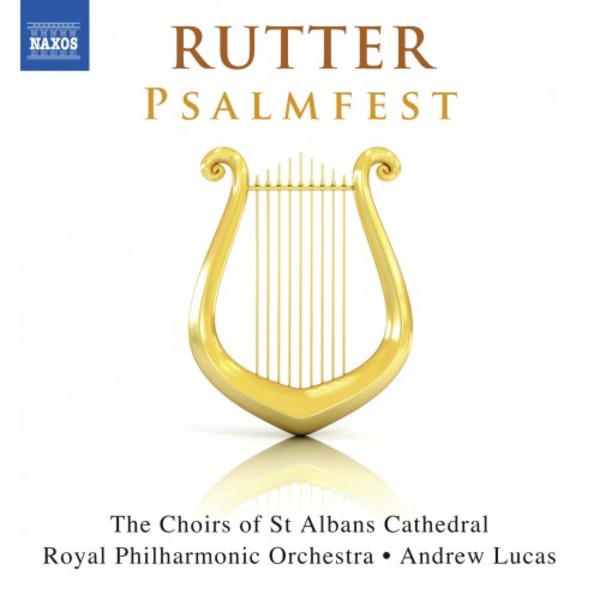 Lord, thou hast been our refuge
Psalm 150
Psalmfest
This is the day

Lord, thou hast been our refuge
Psalm 150
Psalmfest
This is the day

The psalms of David have been a source of inspiration to composers for centuries, each text forming a poetic shape the equivalent of a gothic arch, and expressing a broad range of timeless emotions. Recorded here for the first time in its complete form, John Rutters Psalmfest is a collection of nine settings for full orchestra as rich and varied as the original texts. The remaining psalm settings were written for special occasions, including the wedding of the Duke and Duchess of Cambridge in 2011.

Naxos have had numerous successes with the work of John Rutter, including his Gloria (8572653) performed by almost
exactly the same musical team as this première of the Psalmfest. Of the Gloria, Gramophone wrote that Andrew
Lucass St Albans choristers (particularly the girls and boys, united on the top line) are on sparkling form, with first-class support from organist Tom Winpenny and the Ensemble DeChorum who scrupulously adhere to every one of the scores markings. More recordings from St Albans, please. Added to this, ClassicsToday.com considered it a terrific performance solid and recommendable

Gramophone acknowledges Rutter as the man who has become the most popular British composer of choral music in recent years.

Andrew Lucas has been Master of the Music at St Albans Cathedral and Music Director of St Albans Bach Choir since 1998, and was Artistic Director of the St Albans International Organ Festival from 1999 to 2007. Born in 1958, he studied at the Royal College of Music with John Birch and Herbert Howells and later with Peter Hurford and Piet Kee. Before 1998 he was Assistant Director of Music at St Pauls Cathedral, London and a freelance musician, conductor, chorusmaster and keyboard continuo. He has made many recordings as an organist from St Pauls and conducting at St Albans and has played concerts throughout the United Kingdom, Europe and the United States. This is his fourth recording for Naxos, the first as organ soloist (8550955) and the others conducting music by Rutter (8572653) and Mozart (8573092).