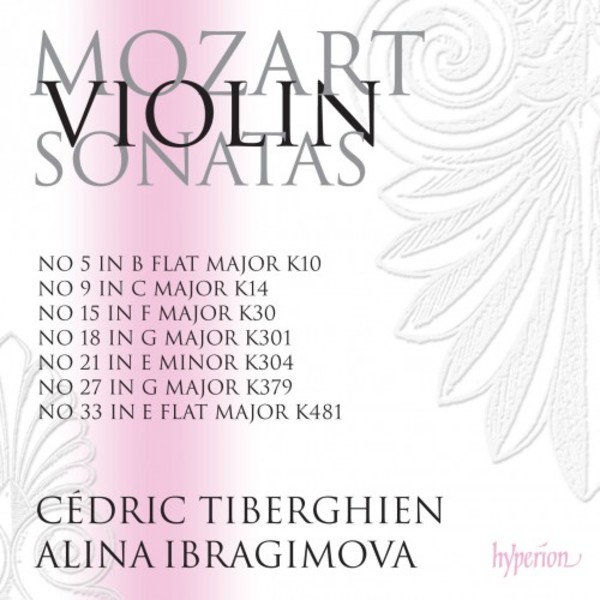 Mozarts violin sonatas span his entire career  the early ones are billed as piano sonatas with optional violin accompaniment  and they develop over the years into the first triumphs of the modern genre. Alina Ibragimova and Cédric Tiberghien have been enthralling audiences worldwide with these works, and now the first instalment is available as a highly desirable 2-for-1 album.

Having already set down the complete Schubert and Beethoven violin sonatas (for Hyperion and Wigmore Hall Live respectively), as well as Ravel and Szymanowski, the violin-piano partnership of Alina Ibragimova and Cédric Tiberghien now turn their attention to Mozart. This competitively priced 2CD set contains three of Mozarts childhood sonatas (strictly speaking, keyboard sonatas with violin accompaniment), with each disc bookended by later works from the composers maturity. From the very opening, the virtues of these performances are apparent: a light touch, deft phrasing, and rhythmic buoyancy, coupled with a sure sense of style and hand-in-glove ensemble.

With such experienced yet still youthful performers, the early works take on a rare freshness, so that even their more routine passagework comes across as engaging, while the moments of real individuality  like the en carillon second Menuetto of the C major Sonata, K14, with its enchanting bell-like sonorities  are utterly charming. Both K10 and K14 were composed in late 1764 while the young Mozart was in London, part of a set of six dedicated to Queen Charlotte. The F major Sonata, K30, written in early 1766 in The Hague, and dedicated to Princess Caroline of Orange-Nassau, already shows signs of increased originality, and it prompts the performers to a more exploratory mood, delicately testing the emotional undercurrents.

The real substance, however, comes with the later sonatas. Though three of them (K301, K304 and K379) are cast in just two movements apiece, the range of invention and expression is wide, and the violin is now fully the musical equal of the piano  a point underscored by the perfect recorded balance achieved by the Hyperion team of engineer Simon Eadon and producer Andrew Keener. The G major Sonata, K301, of 1778 actually started out as a flute sonata before Mozart had a change of mind and extended the melody-instruments range. Here it comes across as a model of happy musical teamwork, alert and joyous, the waltz-like second movement (with its minor-key central episode spotlighting the violin) poised to perfection.

Composed in a hurry for Mozarts employer Archbishop Colloredo in Vienna in spring of 1781, the G major Sonata, K379, has the most interesting formal structure of all these works. The first movement starts as a sonata-form Adagio (complete with exposition repeat!), but at the moment where the recapitulation should come, it suddenly ups tempo to an agitated minor-key Allegro. It is followed by a variation-form Andantino cantabile whose theme, replete with gentle trills, has echoes of Pachelbels famous Canon. With music of such abundant imagination, Ibragimova and Tiberghien seem instinctively to know when to allow the music to do the talking, responding keenly but discreetly to its changes of expression.

The latest work on this set is the E flat Sonata, K481, of December 1785, a three-movement work which really allows the performers to blossom, not least in the rich profundity of the central Adagio, whose harmonic depths are unfolded with tone of enthralling inwardness and beauty. The development section of the motivically fecund first movement anticipates the main theme of the Jupiter Symphonys finale, and although the variation finale starts out at a leisurely pace, it builds to suitably lively conclusion in hunting mode.

Ibragimova and Tiberghien choose to end with the E minor Sonata, K304, of 1778, and its an inspired decision. The only work by Mozart in this key, and perhaps linked to the death of his mother while they were on travels in Paris, this is quite different in expressive intensity from the other sonatas here. From the subdued opening unisons of the first movement to the searingly affecting Minuet with its deeply-felt major-key trio, this brings out the best in both players (including piano playing of incredible softness), and the unresolved harmonic tensions of the close will surely tempt listeners to hope for more Mozart from the same team very soon.

... it would be hard to imagine more persuasive performances [of the early sonatas] than we have here from the ever-rewarding Tiberghien-Ibragimova duo: delicate without feyness, rhythmically buoyant (Tiberghien is careful not to let the ubiquitous Alberti figuration slip into auto-ripple) and never seeking to gild the lily with an alien sophistication. The players likewise bring the crucial Mozartian gift of simplicity and lightness of touch (Ibragimovas pure, sweet tone selectively warmed by vibrato) to the mature sonatas that frame each of the two discs. It was Mozart, with his genius for operatic-style dialogues, who first gave violin and keyboard equal billing in his accompanied sonatas; and as in their Beethoven sonata cycle (Wigmore Hall Live), Tiberghien and Ibragimova form a close, creative partnership, abetted by a perfect recorded balance (in most recordings I know the violin tends to dominate).  Richard Wigmore
Gramophone May 2016

Tiberghiens limpid phrasing, radiant cantabile and velvety, cushioned tone combine exquisitely, captured to perfection by production dream-team Andrew Keener and Simon Eadon. ... Ibragimova and Tiberghien respond [to K304] with playing of captivating subtlety, tracing the musics semantic ambiguities with nerve-jangling acuity. Treating this as the emotional gateway to the later sonatas, they respond to the enhanced emotional range of No. 27, K379 and No. 33, K481 with such graceful sensitivity and micro-inflected insight that at the point of contact it is difficult to imagine them better played.  Julian Haylock
BBC Music Magazine June 2016

The balance between pianist Cédric Tiberghien and violinist Alina Ibragimova on this recording is as beautifully calibrated as always in this long-standing partnership, but here, unusually, it is Tiberghiens poised, lyrical piano playing that is, more often than not, to the fore. ... Each work gets a subtly different approach. Highlights include Ibragimovas tone as she blossoms into the major-key slow theme in the adagio of K481, and Tiberghiens echoey, bell‑like episode in the Sonata, K14; but there is something to raise a smile in every single movement.  Erica Jeal
The Guardian 27 May 2016