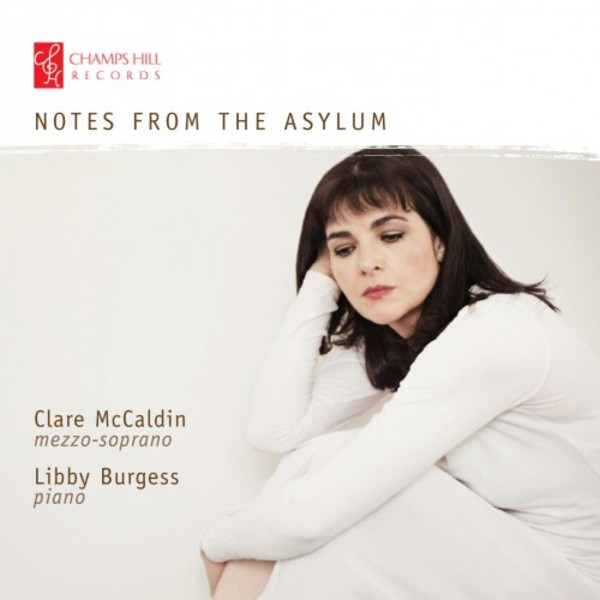 Notes from the Asylum

In Notes from the Asylum mezzo-soprano Clare McCaldin explores songs about female madness.

Clare writes Early in my research I identified two types of song that appealed to me: presentations of madness in fictional characters and in real women whose experience is recorded in poetry or private correspondence.

She begins with Mad Bess with music by Purcell, which can lay claim to being the first Restoration mad song, realised here by Benjamin Britten and given an operatic treatment.

Crazy Jane is the most sucessful composition by Harriet Abrams (c.17601821), a singer and reportedly a pupil of Thomas Arne.

Published posthumously in 1935, the Ophelia Lieder of Johannes Brahms were written in Vienna in November 1873 at the request of the celebrated Viennese actor Josef Lewinsky for his fiancée, the actress Olga Preicheisen, who was about to take the part of Ophelia in a production of Shakespeares Hamlet in Prague.

Hugo Wolf, who ended his days in an asylum, set poems by Eduard Mörike in increasing numbers in the 1880s. The five songs featured here are all sung (or, in the case of Gebet, spoken) by the Ophelia-like character of Agnes as she appears in Mörikes 1832 novel Maler Nolten (The Artist Nolten).

Ariel, Five Poems of Sylvia Plath, for soprano, clarinet and piano, by Ned Rorem, capture, often graphically, that turbulent phase of her life soon to be ended by her suicide at the age of 30.

Vivienne by Stephen McNeff is an opera in six songs, tracing the disastrous marriage of Vivienne Haigh-Wood to T.S. Eliot. Librettist Andy Rashleigh has given a voice to Vivienne, forcibly silenced by a barbaric regime of drugs and who died in an asylum, using Eliots poetry as a jumping-off point to create a powerful identity for Vivienne.