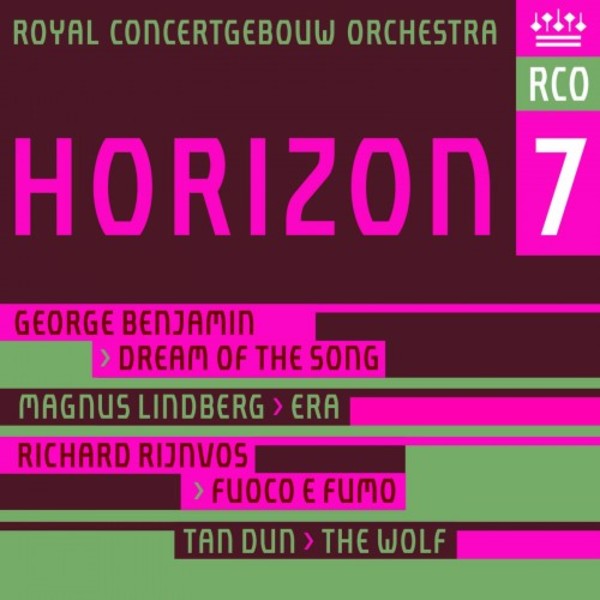 Dream of the Song

Dream of the Song

The seventh release in RCO Live's Horizon series features world premieres recorded during three concert seasons. Magnus Lindberg's sumptuous Era  a birthday present from the Concertgebouw Hall to the Royal Concertgebouw Orchestra - dates from the 2012-2013 season. Both Tan Dun's catchy double bass concerto The Wolf and Richard Rijnvos's fuoco e fumo about the 1996 destruction by fire of the Venetian opera house La Fenice, are from 2015.

The programme opens with a beguiling 20-minute work for countertenor, womens voices and orchestra, Dream of the Song, Benjamins first work since his ground-breaking opera Written on Skin, was premiered in September at Amsterdams Concertgebouw by the countertenor Bejun Mehta, the ladies of the Netherlands Chamber Choir and the Royal Concertgebouw Orchestra conducted by its composer. The work sets verse by three major poets who spent formative years in Granada; two Hebrew poets of mid-11th century, Samuel HaNagid and Solomon Ibn Gabirol (sung by solo countertenor in English versions by Peter Cole), and Gabriel Garcia Lorca (sung by the female chorus in the original Spanish). Commissioned by the Royal Concertgebouw, BBC and Boston Symphony Orchestras and the Festival dAutomne, the work received its UK premiere on 18 March with Iestyn Davies, the BBC Singers and BBC Symphony Orchestra conducted by Oliver Knussen.

"Dream of the Song proved to be perfectly structured music of great beauty, fleet-footed and profound, varied and thoughtful... From the virtuosically poetical opening song to the concluding ode to daybreak, the fluid melodic lines fitted Mehta's bronzed voice like a glove. Benjamin possesses a passionate, almost fanatical, gift for tone colour The reduced orchestra sounds mysterious and silvery, with an occasional well-placed punch from the horns or a plaintive oboe melody. The interaction between voice, choir and instruments was reminiscent of the game of sunlight on water, with fish just below the surface: sometimes you know exactly what you heard, and then the sounds subtly and inimitably flowed together again." - NRC Handelsblad (Joe Stack), 28 September 2015

Horizon, the Royal Concertgebouws series devoted to contemporary music, has become a very useful chronicle of what that great orchestra commissions and premieres. The latest instalment includes four pieces introduced in Amsterdam between 2013 and last year. For British listeners the main interest will be George Benjamins Dream of the Song, the orchestral song cycle on Andalucian texts from the 11th and 20th centuries that was first performed by the RCO last September, conducted by the composer. When the piece arrived in London two months ago, the counter-tenor soloist was Iestyn Davies; in this recording its Bejun Mehta, who values the text more than Davies did, and is alive to the sense of every syllable. The whole performance projects Benjamins soundworld and its luxurious interplay between instruments and voices far more vividly than it came across at the Barbican; its easily the most striking score in this collection.  Andrew Clements
The Guardian 27 May 2016