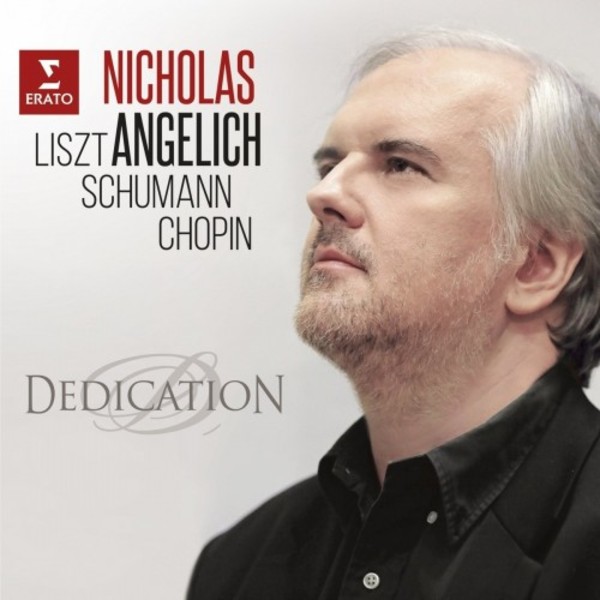 With this album entitled La Ronde, Nicholas Angelich pays tribute to the relationships between three of Romanticisms greatest composers for the piano, all born within 18 months of each other in 1810-11: Robert Schumann, Franz Liszt and Frédéric Chopin.

Until now, Angelichs recordings for Erato have placed a special emphasis on a composer of the subsequent generation, Johannes Brahms, leading the Daily Telegraph to praise him for interpretations of a wholly exceptional drama, sweep and impeccable craftsmanship. Le Figaro, meanwhile, has described him as an artist who uses his piano to the maximum of its possibilities  combining total mastery with an ultra-sensitive touch," while the Huffington Post has written that with beautiful sound, a wide dynamic range, without virtuosity or effort, he never let us forget the overwhelming message of the music he embodied with all his soul.

In the first instance the name La Ronde  meaning round dance  might evoke the initially controversial play by Arthur Schnitzler (Reigen in German) that was most famously adapted by Max Ophüls for his 1950 French-language film. There is, however, nothing controversial about the programme for Angelichs recital: uniting four highly contrasted landmarks of the Romantic piano repertoire, it emphasises the mutual respect between the three great pianist-composers: Schumann dedicated Kreisleriana to Chopin; Chopin in turn dedicated two of his Op.10 Etudes to Liszt, and Liszt in turn dedicated his B minor Piano Sonata to Schumann.

Even though the three composers led very different lives, they did know each other personally. Liszt first met Chopin in Paris in 1831 and praised him for revealing a new phase of poetic sentiment combined with such happy innovation in the form of his art. That same year Schumann, writing in the Allgemeine Musikalische Zeitung, greeted a work by Chopin with the words, Hats off, gentlemen! A genius! Chopin and Schumann first met in 1835 in Leipzig and again the following year. In 1840, Schumann travelled to Leipzig to meet Liszt  they had been corresponding for several years prior to this trip, exchanging scores and complimenting each others work. When Schumann heard Liszt perform, he wrote: "How extraordinarily he plays, boldly and wildly, and then again tenderly and ethereally!

Nicholas Angelich, American-born, but French-trained, is especially admired in the Central European repertoire of the 19th century, with Liszt, Schumann and Chopin all prominent in his personal pantheon. In 2011, Liszts centenary year, he gave notable performances of the composers formidable Années de pèlerinage, while he expressed some fascinating views on Schumann and Chopin in an interview for the French website Jejouedupiano: Schumann knew how to make the piano sound in a very special way, in accordance with his wishes. I dont think it is fair to set the supposed clumsiness of his writing against the natural facility that people ascribe to Chopin, the Prince of Pianists. Chopin had a special relationship with his instrument, which he understood like no-one before him.

Nicholas Angelichs new release, with its conceptual underpinning of Schumanns work dedicated to Chopin, Chopins to Liszt and Liszts to Schumann, reveals him at a new level of artistic accomplishment. Given the distinct personalities and temperaments of the three pillars of Romantic pianism, few pianists play them equally well. Angelich comes very close, here represented in a fully dimensional, life-like sound, as captured by the engineers at Erato. ... The Liszt Sonata is brilliant in both concept and execution. Parenthetically it should be noted that octave passages are even faster and more accurate than Horowitzs 1932 account. But dazzling octaves do not a successful B minor Sonata make, and here they are but one feature of a spacious musical topography. The defining architectural elements contributing to this mighty edifice are subtly sculpted phrase shapes, vivid contrasts of texture and articulation, and an unerring sense of dramatic thrust.  Patrick Rucker (Recording of the Month)
Gramophone July 2016