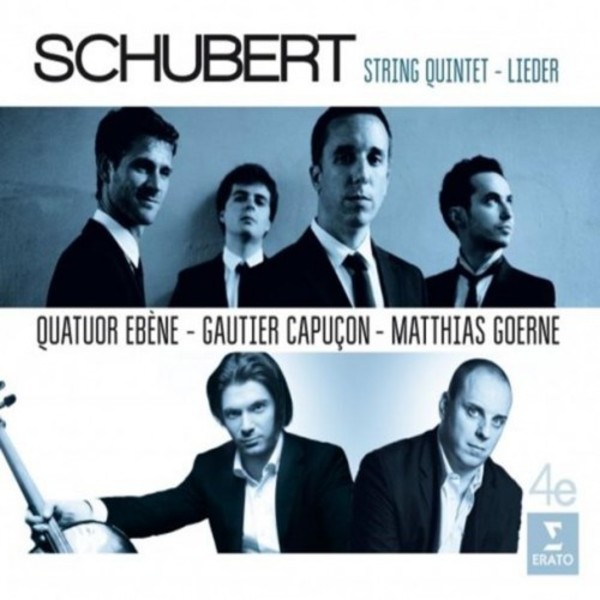 In 2014 Erato released Schuberts glorious Trout Quintet, recorded live at Pariss Salle Pleyel by members of Quatuor Ebène with nonagerian pianist Menahem Pressler. The French quartet  with a new viola-player, 24-year-old Adrien Boisseau and a distinguished guest cellist, Gautier Capuçon  now turns to another Schubert quintet, his final chamber work and one of his sublime masterpieces: the Quintet for two violins, viola and two cellos in C major D956, often known simply as the Schubert Quintet. Its slow movement in particular, in which time seems to stands still, is a favourite with music-lovers.

In a characteristically imaginative move, Quatuor Ebène has complemented this substantial work, which lasts nearly an hour, with five of the 600 or so songs that Schubert composed during his lifetime. Replacing the customary piano accompaniments are sensitive new arrangements for string quartet and double bass (Laurène Durante), made by the Ebènes cellist, Raphaël Merlin, while the singer is the German baritone Matthias Goerne. Established as one of the worlds greatest interpreters of lieder, he has a timbre that, in the words of Gramophone, is notable for its distinctive mellow roundness  at once deep and soft-grained. Goerne has said that: There are no limits to Schubert. He is limitlessly deep  whether you are interpreting him or listening to him. He reveals all the facets, desires, fears and flaws of a human being. The five songs on this CD  Die Götter Griechenlands, Der Tod und das Mädchen, Der Jüngling und der Tod, Atys and Der liebliche Stern  all deal with themes of death or nostalgia, while also demonstrating Schuberts extraordinary expressive scope.

The Ebènes recording of the Trout Quintet with Menahem Pressler was greeted enthusiastically by Gramophone  [It] radiates such communicative spirit and pure delight in making music together, while the UKs Observer newspaper, writing shortly before Christmas 2014, said: This is the present for any chamber music lover  if you can bear to give it away. The new programme of the String Quintet and songs was presented in October 2015 at the prestigious annual festival in Austria which takes its name from the musical evenings the composer used to enjoy with his friends: Schubertiade. As the Austrian magazine KULTUR-Zeitschrift wrote: The general standard of the concerts at the Schubertiade is very high, but there will always be one chamber music event that stands out  and in this case it involved the French Quatuor Ebène, the baritone Matthias Goerne, the double bassist Laurène Durantel and the cellist Nicolas Altstaedt [rather than Gautier Capuçon, who appears on the CD]. Musical communication , tonal flexibility and great emotional breadth are the trademarks of Quatuor Ebène  The arrangements of well-known Schubert lieder offered a wealth of discoveries for the listener. Raphaël Merlin has arranged the piano parts [of the songs] with great dedication; the use of strings gave the songs a new and readily accessible character  as each took on the characteristics of a scena, an aria or a mini-drama.  The players and Matthias Goerne collaborated superbly. The baritone took centre stage and brought each song to life with distinctive expression ... full of nuance in every register  fusing lyricism and drama The interpretation of Schuberts C major Quintet fully captured its essence  The themes rang out in their many forms in the opening movement; after the finely spun Adagio the Scherzo burst with percussive energy, and once the players had rounded off the final movement there was a storm of applause from the audience.

The Quintet is the peak of Schuberts chamber output and high on any ensembles wish-list. The essential recordings range from the Amadeus Quartet ... to the Gramophone Chamber Award-winning Pavel Haas Quartet ... with any number in between. So new recordings are going to have to be something special. This one is. For a start, the Ebène Quartet quite clearly think deeply about every note, every texture, every gesture ... And they have gone for nothing but the best in their choice of guest cellist: Gautier Capuçon, who you couldnt usually imagine playing second cello to anyone. ... The standard coupling for the Quintet is usually the Quartettsatz. Here, however, the Ebène offer something unique: a set of arrangements of five generally sad songs for which they are joined by Laurène Durantel on double bass and the dark baritone of Matthias Goerne, making a rather special appendix to his series of piano-accompanied Schubert Lieder for Harmonia Mundi.  David Threasher
Gramophone May 2016

I have no hesitation in claiming this to be a recording for the ages. The quartet play as one with the star cellist Capuçon not drawing attention to himself, but integrating ideally with the others. ... Goerne sings to the manner born, leaving a most positive impression. While having Schubert lieder arranged as here in no way detracts from the value of the programme, it is for the superlative account of the great String Quintet that I will often revisit this wonderful disc.   Leslie Wright (Recording of the Month)
MusicWeb International June 2016