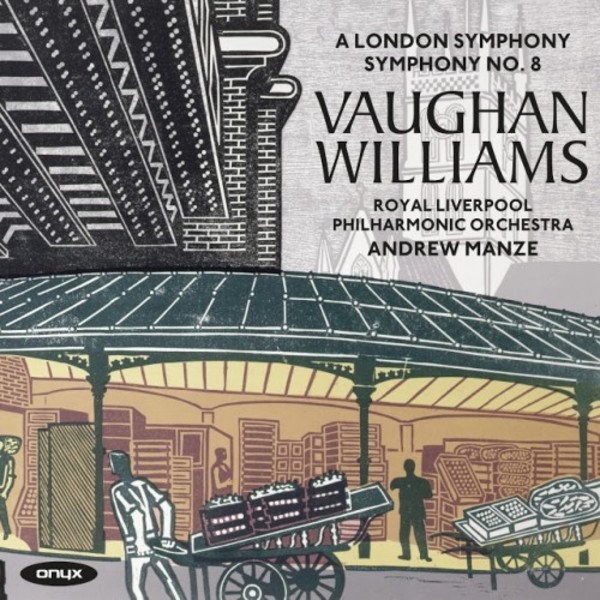 Andrew Manze has established himself as one of the leading interpreters of Vaughan Williams Symphonies. His 2012
BBC Proms performances drew critical acclaim, and were highlights of that season's Proms. ONYX Classics will release one volume a year, completing the cycle in the spring of 2019 with Symphonies 7 & 9.

It was RWVs friend and fellow composer George Butterworth who in 1912 suggested he write a purely orchestral
symphony. RVW told him he had absolutely no plans to do so, but Butterworth was a very perceptive friend and
colleague, and the premiere took place in 1914. Called A London Symphony (RVW considered himself a Londoner),
RVW thought a better title would be A Symphony by a Londoner. On New Years Eve that year RVW joined the army
and went to the trenches in France. Butterworth would be killed by a sniper at the Somme in 1916.

The 8th Symphony of 1955 is a tightly written, brilliant and innovative work that shows RVWs creativity at full stretch. Although outwardly a sunny work, shadows of the 6th and 7th symphonies lurk in the background at points throughout this brilliant symphony.

Next in the RVW Symphony cycle from Andrew Manze and the RLPO will be Symphonies 3 & 4 [ONYX4161] to be
released in March 2017.

"Manzes Vaughan Williams [Symphony No.8] was beautifully imagined from the first gleaming pools of vibraphone
and celesta to the carnivalesque scherzo for wind and the tender cavatina for strings." - The Times, October 2015

Though Vaughan Williams was ambivalent about the programmatic content of A London Symphony (1912-13), its elegiac qualities, looking back on the Edwardian age, come across vividly in performance. That is particularly the case with this new account from Andrew Manze and the Royal Liverpool Philharmonic, the start of a new Vaughan Williams cycle on Onyx. Perhaps Manzes background in early music has informed the extraordinarily clear textures he gets from his players; what is unmistakable is the attention to detail, every strand and motif brim-full of expression. From the hushed opening and the Westminster chimes rung out by harp harmonics, this is a very special performance.

Even as the first movement swings into life with its famous chromatic wail, this is an astonishingly gripping picture of a time when horses rather than cars, apple-carts and barrows rather than wheelie-bins, filled the streets of the capital. Manze gives the music just the right degree of momentum, rhythmically robust and buoyant. While the strings play gorgeously, the woodwind are particularly characterful, and the brass are in turns supportive and biting. Thrilling as the first movement is, it is the slow movement - supposedly depicting Bloomsbury Square on a November afternoon - that really stands out. Delicate strings support a melting cor anglais solo, and the lone viola of the central section is ideally focussed, while Manze is careful not to overplay the tutti climaxes: this is music that can often best make its mark by understatement, a very English quality.

The scurrying, nocturnal Scherzo is brilliantly done: alert, well-sprung, and with fastidious care over dynamics. The nightlife seems to leap off the page in the Trio sections, and the fade away at the movements end is the perfect springboard for the finale. In the introduction to the last movement, the pain of nostalgia and the drudgery of toil are brought out, with growling brass and gloriously cantabile strings. This offsets a lively, transparent account of the central Allegro, before an Epilogue of almost Sibelius-like atmospheric intensity. By any standards, this is a remarkably arresting account of Vaughan Williamss own favourite among his symphonies.

An ideal coupling comes in the form of the Eighth Symphony (1953-55), that unlikely late masterpiece whose very lack of programme has helped its wide international appeal. Here, as in the London, Manze and the Liverpool musicians really savour every detail of Vaughan Williamss brilliant orchestration. The unusual sonorities - beginning with the vibraphone of the very opening, and extending to the punchy wind-only Scherzo and the exotic array of percussion in the closing Toccata - are splendidly captured by producer Andrew Keener and engineer Phil Rowlands, a tribute to Onyxs high production values. Once again, the playing is alert and animated, with real rhythmic verve and, in the Cavatina third movement, plangent string lines.

In sum, a tremendously promising start to what could well be one of the outstanding Vaughan Williams cycles of recent years. Marrying sonic excellence and keen musicality, these are performances for not just this but any age.

In embarking on a new Vaughan Williams symphonic series, Andrew Manze faces stiff competition -- there's already at least half a dozen complete cycles, and two others in prospect. Yet Manze and the Liverpool players offer not only the immaculate tuning and ensemble taken for granted nowadays from this orchestra, but also expressive and atmospheric playing such as has been rarely heard in Vaughan Williams since Adrian Boult's heyday, all recorded in warm yet naturally detailed sound.  Daniel Jaffé
BBC Music Magazine July 2016

This is the promising start of a complete Vaughan Williams symphonies cycle by the RLPO and Andrew Manze, now an established RVW interpreter (having an impressive parallel career as a baroque violinist). Manze keeps a tight rein but lets the music blossom. The RLPO and its excellent soloists make a warm, lustrous sound. Onyx has chosen No 2 A London Symphony (1914) and No 8 (1955) to kick off the series, due for completion in 2019. Its a great way to start, immediately revealing the long journey Vaughan Williams travelled, from the programmatic street sounds of the London to the majestic innovations and delicious vibraphone and celesta colours of the Eighth. Fiona Maddocks
The Observer 24 April 2016