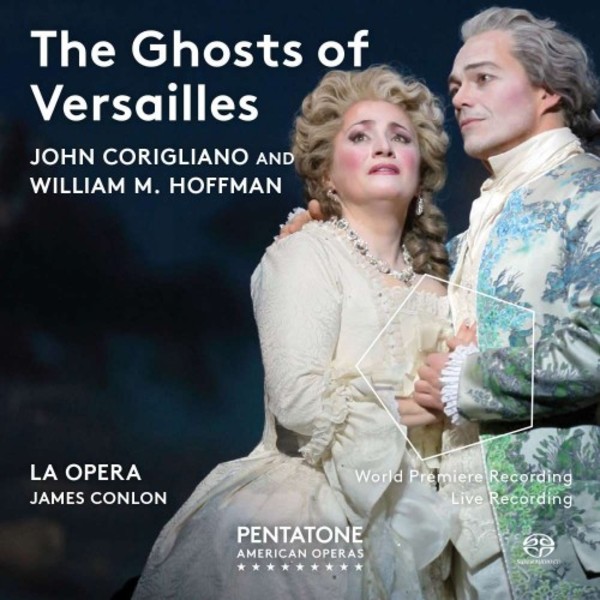 Corigliano - The Ghosts of Versailles

The Ghosts of Versailles

The Ghosts of Versailles

Commissioned by the Metropolitan Opera to celebrate its 100th anniversary, John Coriglianos The Ghosts of Versailles received its premiere at the Met in 1991, twelve years after it had been commissioned and eight years past the centennial season for which it had first been envisioned. Nonetheless, it was an instant success. Because of the unique situation, a large cast and extravagant orchestral forces were made available, but aside from that specific context, both John Corigliano and librettist William Hoffman conceived of Ghosts as a work of music theatre that celebrates and even takes as one of its principal themes the artistic power of opera: it puts into use lavish operatic resources precisely to introduce a contemporary audience to grand opera.

More particularly, a grand opera buffa is what John Corigliano decided to create, to combine his love for opera buffa, with the requirements of a grand opera house, which is the Met. The success of Ghosts resulted in many performances throughout the North-American continent in the 25 years to follow, one of which took place in February 2015 at the LA Opera, to great critical acclaim.

It's comic and serious, entertaining and erudite, silly and thoughtful, emotional and mysterious, harrowing and uplifting, intimate and over-the-top  and the more times you see it, the more you'll find in it and the more you'll get out of it. - Los Angeles Times

Conducted by James Conlon, the production was recorded live by the renowned Soundmirror recording company and will now be released on a splendid 2-SACD album as part of PENTATONEs newly launched American Opera Series.

The artists of Los Angeles Operas 2014 production made as compelling a case for The Ghosts of Versailles as I heard on its first night at the MET in 1991. To have that performance preserved in a recording of this quality is, for this composer, a dream come true. - John Corigliano