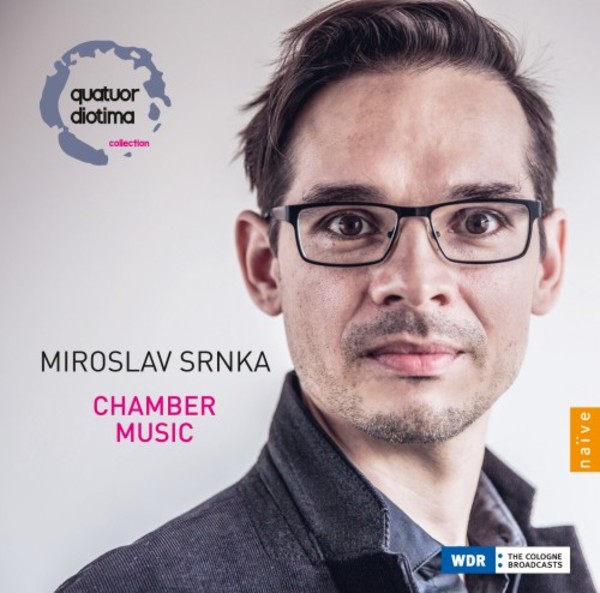 Engrams for string quartet
Pouhou vlnou for piano quintet
Simple Space for cello and piano
Tree of Heaven for violin, viola and cello

Engrams for string quartet
Pouhou vlnou for piano quintet
Simple Space for cello and piano
Tree of Heaven for violin, viola and cello

Celebrating 20 years since the Diotima Quartet was formed, this is the second of two recording events for April release and the first of a new series of contemporary composer portraits, dedicated to the works of Czech composer Miroslav Srnka. It will be followed a portrait of Gérard Pesson, in collaboration with WDR Symphony Orchestra.

Miroslav Srnka (b. 1975) studied musicology and composition in Prague, Berlin and Paris, and worked as a music magazine editor and later editor-in-chief of a music publishing house, developing critical editions of Antonín Dvorák, Leo Janácek and Bohuslav Martinu.

Inspired by manuscripts of Antonín Dvorák, Srnka wrote the ensemble piece Les Adieux in 2004. It was premiered by Ensemble Modern and Matthias Pintscher in 2007. Ensemble Intercontemporain subsequently commissioned My Life Without Me for soprano and ensemble on texts by Spanish film director Isabel Coixet.

In Paris, Srnka worked with the Quatuor Diotima on their recording of Janáceks 2nd String Quartet. It was the beginning of a lasting collaboration between composer and ensemble: Quatuor Diotima have performed Srnkas works in many countries and premiered Engrams in 2011.

Participating on the Jerwood Opera Writing Programme and Fellowship from 2007, Srnka collaborated with director Matt Lutton and playwright Tom Holloway to write the chamber opera Make No Noise, first performed by soloists of Bavarian State Opera, Ensemble Modern and Christopher Ward in 2011. In the same year, Srnkas childrens comic book Jakub Flügelbunt for three singers and orchestra was premiered at the Semperoper Dresden with Tomá Hanus.

Srnka and Holloway continued their collaboration with South Pole, a double-opera in two parts commissioned by the Bavarian State Opera written for Rolando Villazón as Scott, Thomas Hampson as Amundsen and Kirill Petrenko as conductor.

After receiving the Ernst von Siemens Composers Prize in 2009, Srnka decided to relinquish his editorial career to focus fully on composition.