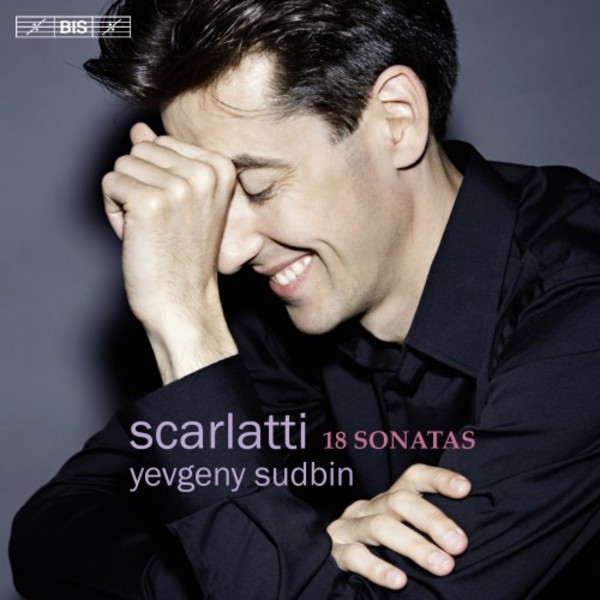 With the 2005 release of his first recording for BIS Records, Yevgeny Sudbin catapulted into the pages of the international music press. The disc was a Scarlatti recital that prompted reviewers worldwide to compare the then 24-year old pianist in the most flattering terms to Scarlatti experts such as Horowitz and Pletnev. It went on to receive a long list of distinctions, including an Editors Choice in Gramophone, where the accompanying review described it as among the finest, certainly most enjoyable of all Scarlatti recitals. Since then, Sudbin and BIS have enjoyed a highly successful collaboration, resulting in numerous acclaimed recordings of both solo programmes and concertos. To celebrate the past 10 years, a new Scarlatti recording seemed the obvious choice for an anniversary present  to ourselves, and of course to all Sudbin fans and Scarlatti lovers. Said and done: Sudbin met up with Marion Schwebel, the recording producer with whom he has collaborated from the very beginning, for recording sessions in the silken acoustics of St Georges in Bristol. The results can be heard on this new disc: 18 sonatas selected from the total of 555, a collection of striking, even bewildering, variety. Through it all, Sudbin guides us with authority and zeal as he brings to life elements which his own liner notes describe as church bells and gunshots (K119), howls in the streets (K479), trumpets appearing on the horizon (K159), head-spinning dances (K425) but also a wonderful sense of humour (K125)  as well as scenes as melancholic, lean and desiccated as a sun-baked Mediterranean landscape (K99).

performances of a superlative vitality and super-fine sensitivity. [] This is, arguably, among the finest, certainly most enjoyable of all Scarlatti recitals.  The Gramophone Classical Music Guide 2010 on BISCD1508

Its ten years since Yevgeny Sudbin first burst onto the scene with a dazzling Scarlatti recital on the BIS label. Since then, he has built up a devoted following with an array of recordings largely in the Russian repertoire. Now he returns once again to Scarlatti, music that he has grown up with since his student days, and this new disc is if anything even finer: a spellbinding display not just of technical mastery but also supreme musicianship.

Sudbins selection of eighteen sonatas is as close to perfection as you could imagine, ranging from familiar friends to rarities, from the virtuosic to the inward. In all of them, he demonstrates an ability to get inside the music, to know instinctively the feel of each piece so as to bring out its best (where necessary with often daring enhancements) on the modern piano  in this case, a Steinway model D. Yet theres never any sense that hes taking liberties merely for the sake of it; instead he manages to delve deeper into the music, not least on the repeats, which are often radically transformed.

In the brighter sonatas, Sudbin unerringly captures the right tone, as in the deliciously buoyant hunting music of the C major Sonata, K159. In virtuosic showpieces like K29 in D major or the relentless Hispanic bravura of K141 in D minor, hes peerless among living pianists, sustaining a totally convincing narrative even in the shortest works. And hes sufficiently immersed in the Scarlattian genre to be constantly alive to the many sound effects and allusions, such as the church bells and gunshots of K119, the street noises of K479, or the whirl of the dance in K425. Even the fugal sonata which opens the disc, K417 in D minor, sheds all vestiges of stuffy academia and in Sudbins hands becomes awash with colour.

But the litmus test arguably lies elsewhere, above all in the tender, aria-like works, K208 in A major and K318 in F sharp minor, which in these accounts are exquisitely fragile, like flowers suspended in mid-air. And how beautifully he varies the limpid textures of K213 on the repeats: this is very special, and perfectly offset by the lively but fabulously light K125 that follows. K99 in C minor, meanwhile, really does sound (as Sudbin puts it) as melancholic, lean and desiccated as a sun-baked Mediterranean landscape. The gypsy air of K32 inD minor is a beautifully-chosen ending to the recital, the ideal foil to the brilliance of what has gone before, combining nostalgia, sadness, regret and local colour.

Sudbin himself provides the exceptionally eloquent and perceptive booklet notes, reinforcing the abiding impression of the performances themselves: that this is music he loves and cares for. The recorded sound is sumptuous, the piano tone rich yet focused, and this is unquestionably the most captivating Scarlatti recital in decades, a celebration not so much of pianism as of the inexhaustible qualities of the music itself. Even the most die-hard of Baroque purists would be moved by this glorious disc. Superb in every respect!

Sudbin makes no apology for using the full tonal resources that a modern Steinway can offer in works composed for the harpsichord; playing the sonatas on a piano, he says, is effectively equivalent to making piano transcriptions of the originals, and the range of keyboard colour and pedal effects he conjures up for his selection is consistently dazzling. At times, his performances almost amount to recompositions; the ways in which he varies textures in repeats, applies ornaments and even transposes lines by an octave to make textures clearer can seem shocking, but the musicality and peerless pianism with which everything is done makes this a hugely attractive disc, even if purists will still want to hear these works played on a harpsichord.  Andrew Clements
The Guardian 1 April 2016

The rarely played Kk99 is given time to unfold expansively, its moments of Spanishry given with due generosity, while the downwards-rushing scales of the G minor Sonata, Kk373, are vibrantly given. Scarlattis famously treacherous repeated notes clearly hold no fears either, no matter how fast the tempo marking: just sample what he does in Kk29, 125 and 141, in the last of these outplaying even Pletnev, which is no mean feat. And even in a piece as well known as Kk9, one of the highlights on Queffélecs disc, Sudbin finds a rare lightness and dexterity that leaves most others sounding ponderous. When he starts to play with things even more in the second half, its astonishing and utterly mesmerising. The result could have been show-offy, and its a tribute to his pianism and musicality that it doesnt sound that way at all. The triumph of this disc is not that it makes you think what wonderful playing, but what wonderful sonatas. Again and again you marvel at Scarlattis endless invention. And, tellingly, Sudbin ends on a profound note with the tenderly inward Kk32, again given a lusciously vocal quality, which is beautifully captured by BISs sensitive recording. A winner. Harriet Smith (Recording of the Month)
Gramophone April 2016