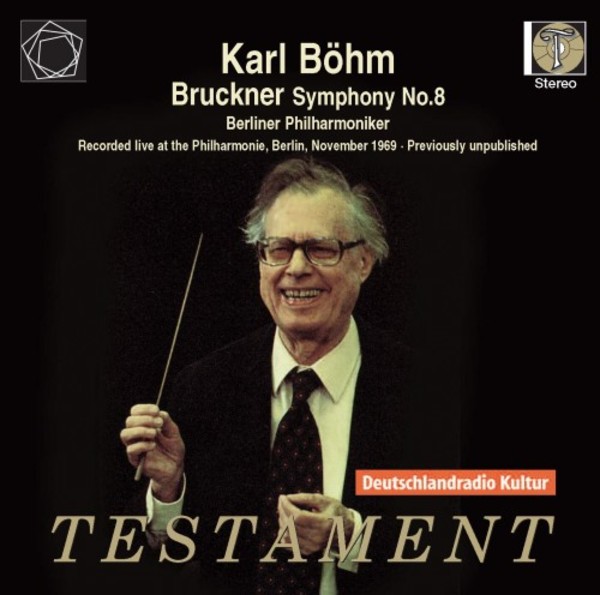 What was the secret of Böhms success as a conductor? According to Gottfried Schmiedel who knew him in his Dresden years, it was all relatively straightforward. Böhm, he said, had a natural gift for simplifying complexity; this enabled him to present repertoire works in a new light. The clear, springy beat indicated a relaxed approach to conducting and he never exaggerated for the sake of effect.

Concerned as Böhm was about the length of Bruckners symphonies and what he perceived was the bafflement which audiences occasionally felt in their presence, his default position in Bruckner was to draw up a simple ground-plan which was then realised with vigour, clarity and an ear for the unfolding drama.

Böhms approach to the Eighth Symphony, the mightiest of the nine, always had a good deal of urgency about it. He was also quick to adopt the Bruckner Societys second, 1955 edition of the work, edited by Leopold Nowak. Robert Haass 1939 edition had restored some 60 bars of music in the Adagio and finale, bars which Bruckner had cut, probably at the suggestion of Josef Schalk. Haas thought the cuts ill-advised. Nowak reimposed them, condemning Haas for what he called inadmissible intermingling of sources. It is a controversy on which the jury is still out.

As well as having little truck with slow tempi in Bruckner, Böhm was never over-concerned with dynamic refinement. With lesser ensembles  and good ones, too, on a bad day  this could give a sense of the performance travelling from A to B as quickly and unceremoniously as possible. The Berlin Philharmonic, which knew all Bruckner styles from Nikisch and Furtwängler to Schuricht and Karajan, took Böhms approach in their stride. They also brought elements of their own legendary power and sonic refinement to the table on occasions such as this live 1969 Berlin performance of the Eighth Symphony.