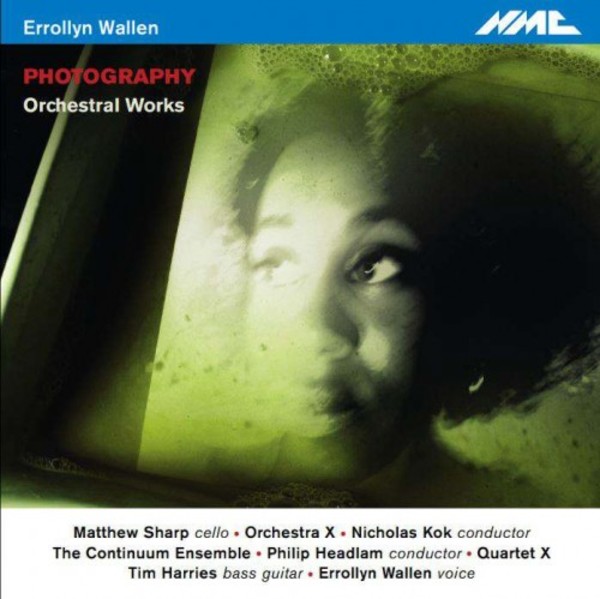 "Wallen is that rare kind of composer: genuinely new, a breath of fresh air, someone who takes all of our preconceptions and stands them on their heads in kindly, loving fashion" - Robert Matthew-Walker

Errollyn Wallens music is both immediately familiar and entirely original. She combines popular styles, aspects of minimalism, baroque counterpoint, modernist rhythms, and lush romantic textures and draws on influences around her. Many of the works on this album have personal associations and are written for long-standing musical collaborators and friends who appear on this recording.

The Cello Concerto combines passion and beauty with a fearless, rigorous technique. It fuses the cello tradition of Bach to Britten with bluesy ostinatos, angular modernist jolts and an immersive string texture. Bach is also the influence in the 4-movement work Photography, with the second movement quoting Sinfonia No.14 (BWV 800).

If Bach provides one of the mainstays of Errollyns kaleidoscopic idiom, the other most obvious one is Purcell. The final track In Earth eerily adapts and distorts Dido's famous lament, using popular music delivery with Errollyn on vocals and jazz musician Tim Harries on bass guitar, accompanied by Quartet X.

Errollyn Wallen was born in Belize and moved to England when she was two years old. She founded Ensemble X in 1990 in order to compose classical music for a handpicked group of brilliant musicians. Her music has been played in outer space on the NASA STS-115 mission, and was broadcast to a billion people around the world when she was commissioned to write a piece for the opening ceremony of the London 2012 Paralympic Games. Her works include commissions by the BBC, Royal Opera House, Wigmore Hall, Brodsky Quartet, Welsh National Opera and Birmingham Contemporary Music Group. She was the first black woman to have her work performed at the BBC Proms and the first female recipient of the Ivor Novello Award for Classical Music.

Music seemed to yank me towards it, writes the Belize-born British composer Errollyn Wallen, and the unselfconscious plain-speak of her work chimes true with that statement. Her writing sounds instinctive. Moods are blatant, gestures are unambiguous, she pinches from baroque, jazz, film, romantic and minimalist idioms and wears those influences bright and proud on her sleeve. Some passages risk straight-up pastiche and the chugging rhythmic stuff wears thin when there isnt enough else going on, but this album  the first devoted entirely to Wallens orchestral music  features vibrant performances from the ensemble she established to play her work. Overall, its a fine portrait of a wide-ranging artist.  in the touching final piece, In Earth, Wallen herself sings Didos Lament. Her voice is breathy, intimate and immediate while echoey rumbles from bass guitarist Tim Harries smudge the edges of Purcells melody.  Kate Molleson
The Guardian 25 March 2016