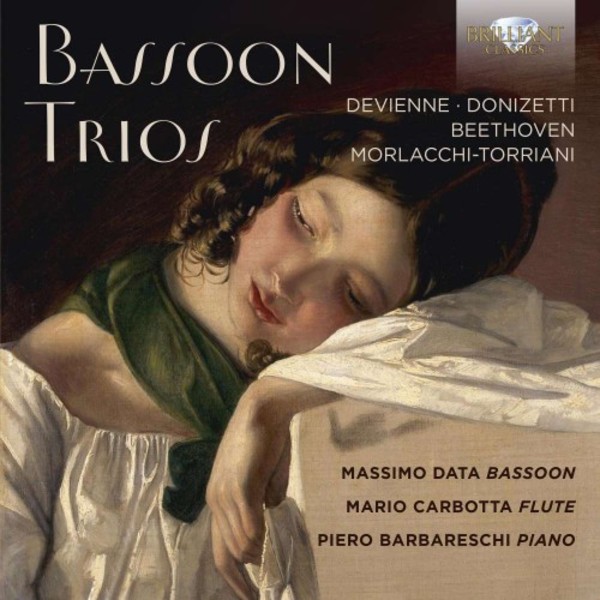 Trio for piano, flute, and bassoon in G major

Sonata in C for flute and bassoon

Trio in F for flute, bassoon and piano

Trio for piano, flute, and bassoon in G major

Sonata in C for flute and bassoon

Trio in F for flute, bassoon and piano

What at first glance appears an eclectic trio of Classical‐era composers from three nations can be experienced as a harmonious combination through the carefree exuberance which each of them brought to the combination of bassoon and flute  father and daughter of the wind family.

The Sonata for flute and obbligato bassoon by François Devienne (1759‐1803) is recorded here for the first time. It is a typically enjoyable example of chamber composition of the late 18th century, and just as the finale may bring to mind contemporary works by Haydn and Mozart, so may the early sonata by Beethoven in which the two winds are joined by a piano. He wrote it in his teenage years, and what the sonata lacks in expressive profundity is compensated by an already‐sophisticated understanding of the instruments at his disposal.

Though Donizetti is now famed as a prolific opera composer, he wrote much chamber music, including 18 string quartets and the trio sonata for flute, bassoon and piano recorded here. The first of the Trios two movement is a Larghetto that begins in somewhat operatic terms, like a recitative to proceed the main argument of an aria and cabaletta, which duly follows in the form of a free‐flowing Allegro without the tension of his mad scenes.

This originally compiled album is completed by a Duetto concertato for flute, bassoon and piano on themes by Verdi. It was written by the flautist Pietro Morlacchi (1828‐1868) and his bassoonist friend Antonio Torriani (1829‐1911) when they were still students at the Verdi Conservatoire in Milan. It is, naturally, superbly written for the two wind instruments, and a typically lively example of the operatic pot‐pourri that was so popular in the 19th century. Only one other recording is available, and that at full price.