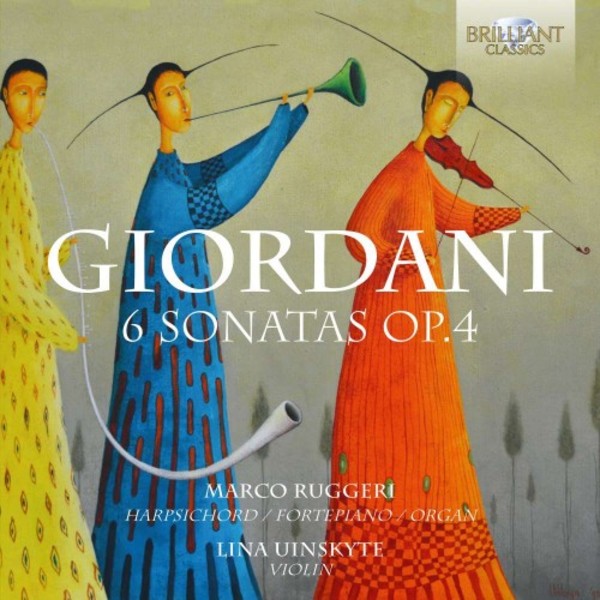 Naples-born, Tommaso Giordani (c. 1730-1806) travelled across Europe with his artistically talented family, which formed a small opera troupe of its own. While Tommaso was still a teenager, the Giordanis gave performances in Ancona, Graz, Frankfurt and Salzburg, and were eventually invited to perform as part of the 1753-4 season of sundry entertainments at the theatre in Covent Garden which was later rebuilt as the Royal Opera House.

A decade later they settled in Dublin, where Tommasos career as a composer got off to an inauspicious start with an Italianized version of The Beggars Opera which did not go down well with audiences who were quite content with John Gays bawdy original. However, in subsequent years he produced several more comic operas which fared much better, and by the early 1770s Giordani was very active with the Italian Opera at the King's Theatre. It is from this period that this set of six agreeable chamber sonatas is dated, being published in 1773.

Bobbing in the wake of JC Bachs galant style, Giordanis sonatas nonetheless have a distinct personality of their own. Their cantabile qualities are underpinned by the not inconsiderable measure of technical virtuosity required by the violinist and the keyboard player. The dialogue between the two instruments is compelling and heralds a composer of considerable stature.

Commercial considerations may have led Giordani to write the florid keyboard parts in such a way that they may be played on any appropriate instrument  an option taken up by Marco Ruggeri in these stylish, historically informed recordings, which are played on a chest-type positive organ built 1998 by Giorgio Carli with four stops; a two-manual harpsichord after Pascal Taskin (1768), built in 2005 by Keith Hill (Michigan); and a fortepiano after the Viennese maker JJ Koennicke (1795), also built by Hill.