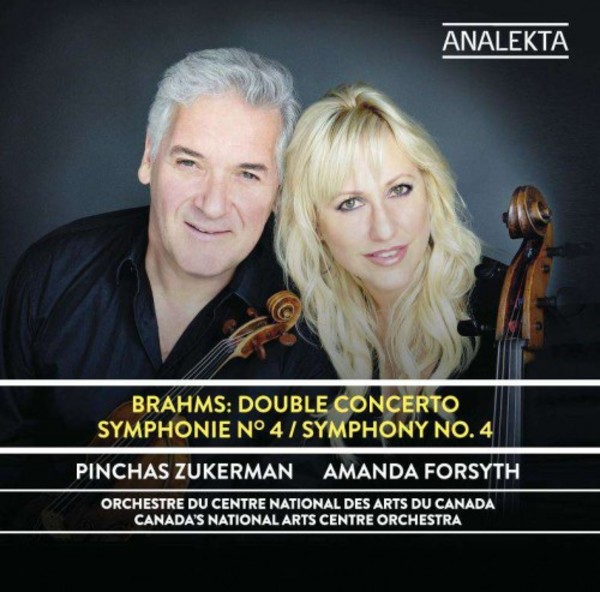 Double Concerto for violin and cello in A minor, op.102
Symphony no.4 in E minor, op.98

Double Concerto for violin and cello in A minor, op.102
Symphony no.4 in E minor, op.98

Canadas National Arts Centre Orchestra gives more than 100 concerts a year with internationally renowned artists, and is distinguished for the passion and clarity of its performances on stage and on disc. Violinist and music director for this new album under the Analekta label, Pinchas Zukerman, a phenomenon on the music scene for over forty years, and Amanda Forsyth, who is regarded as one of North Americas most dynamic cellists, join the National Arts Centre Orchestra in presenting magnificent works by Johannes Brahms.

The musical genius of Pinchas Zukerman transcends the norm, his prodigious technique and unwavering artistic standards a constant source of wonder to audiences and critics. His extensive discography contains over 100 titles, and has earned him two Grammy awards and 21 nominations. When he arrived to head the Orchestra in 1999, he created the Young Artists Program, a branch of the NACs Summer Music Institute, to provide high-level training for talented young musicians in Canada and elsewhere. He turned over the Orchestras music direction duties to Alexander Shelly in 2015. Canadian JUNO Award-winning Amanda Forsyth has a number of recordings to her credit. This album is her first on the Analekta label. Amanda Forsyth plays a rare Italian cello made in 1699 by Carlo Giuseppe Testore.

The Concerto in A minor for Violin and Cello, op.102, is the last purely orchestral composition by Brahms; it was written in 1887, ten years before his death. Although the work remains the least played of Brahmss four concertos, it is, through its prodigious power, its signature Brahmsian melodies and its sublime phrasing, one of his greatest achievements. Compositions for this combination of solo instruments are few and far between, but Brahms succeeds in integrating them into a concerto that showcases the tonal beauties of each. In the Allegro movement, the soloists engage in a dialogue: with each other, individually with the orchestra, or as a group with the orchestra. The Andante movement, meanwhile, in ternary form, is imbued with the most ardent lyricism and Brahmss grandest melodies. In his biography of the composer, Walter Niemann describes this movement as a great ballade, steeped in the rich and mysterious tone of a northern evening atmosphere. The final movement is a rondo whose main theme is Hungarian-inspired; and a brilliant coda takes the concerto to its conclusion in the glorious key of A major.