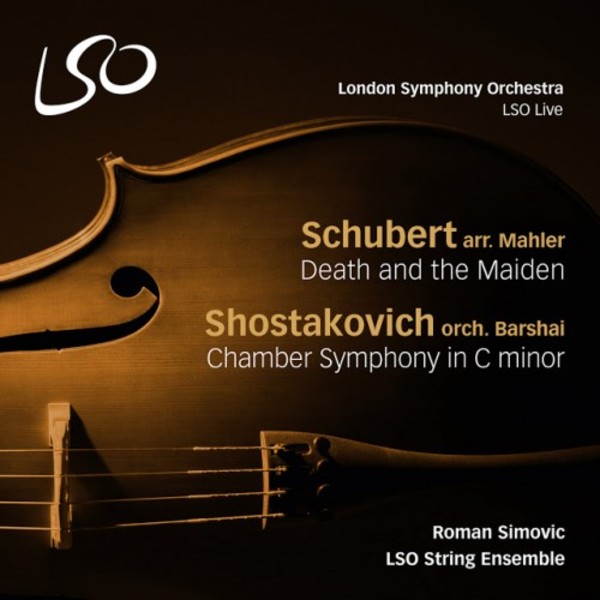 Schuberts Death and the Maiden Quartet, heard here in Mahlers stunning arrangement, is one of the most popular pieces in the repertoire. The original Quartet was written soon after Schubert had suffered from a significant period of illness, and some have speculated that it is the composers testament to death. The piece gains its title from the second movement, which is a set of five variations based on the melody of one of Schuberts most poignant songs, Death and the Maiden, in which a girl struggles against the terror of impending death, that grisly man of bone, who casts himself as a welcome friend.

The Chamber Symphony in C minor is an arrangement for string orchestra of Shostakovichs String Quartet No 8, prepared with the composers approval by the violist, conductor, and founder of the Moscow Chamber Orchestra, Rudolf Barshai. Shostakovichs Eighth Quartet was written over just three days in 1960 and the composer, deeply depressed at that time, initially intended it to be his last work. The piece is full of quotations that hold a deeply personal significance, including a motif from Tchaikovskys Pathétique Symphony, and references to several of Shostakovichs own works. Most strikingly, Shostakovichs initials DSCH are embedded throughout the entire work, giving the piece an intensely personal musical fingerprint.

This performance was recorded live at the Barbican on 26 April 2015 as part of the LSO International Violin Festival. The LSO String Ensemble were filmed in 360 VR during this performance and this footage will be used to support the release of this hybrid SACD.