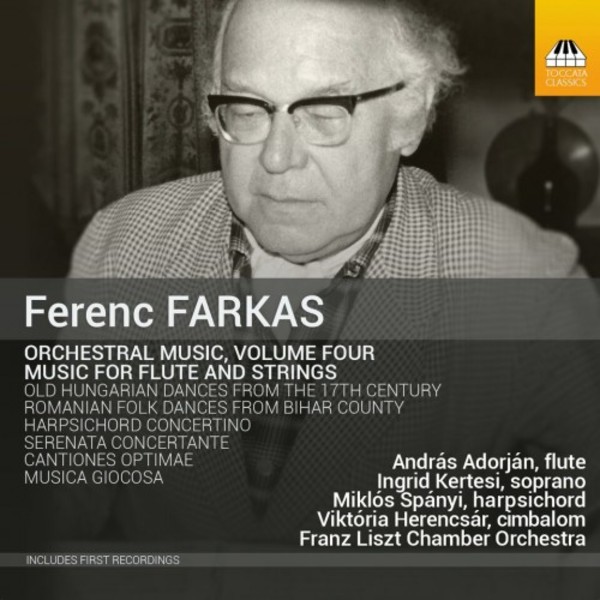 This fourth release in a series of recordings of orchestral music by the Hungarian composer Ferenc Farkas (19052000) concentrates on his music for flute and strings. It highlights the characteristics that make his music so appealing: catchy tunes, transparent scoring, buoyant rhythms and a fondness for Baroque forms and folk-dances. Two other concertante pieces  featuring soprano and harpsichord  offer contrast.

Just as the previous CD in this series presented the playing of a major Hungarian musician, the oboist Lajos Lencsés, this one features the outstanding flautist András Adorján, for whom much of this music was written.

Born in Budapest in 1944, András Adorján has been an internationally acclaimed concert flautist for several decades. He has served as the first solo flute for orchestras in Stockholm, Cologne, Baden-Baden and Munich. He took up a professorship at the Musikhochschule in Cologne in 1987 and at that in Munich in 1996. He has re-discovered, edited, performed and recorded numerous forgotten works and has also inspired and commissioned works from many contemporary composers, including Georges Bartobeu, Gunnar Berg, Edison Denisov, Ferenc Farkas, Vagn Holmboe, Jan Koetsier, Noël Lee, Miklós Maros, Alfred Schnittke, and Sven Erik Werner. He has made over 80 recordings.