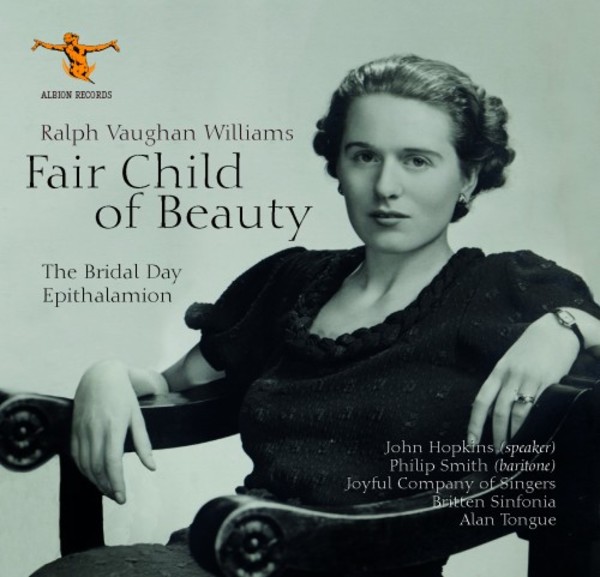 Edmund Spenser (1552/31599) wrote the ode Epithalamion to celebrate his marriage to Elizabeth Boyle on 11 June, 1594, and it was published, along with the related sonnet sequence Amoretti, in 1595.

The work consists of 24 stanzas, comprising a series of long and short lines, with each stanza describing a segment of the wedding day. The stanzas conclude with a variation of the pastoral refrain: 'That all the woods them answer and their echo ring.' The poet uses 365 long lines, representing the number of days in the year. The voice in Spenser's Epithalamion is that of the bridegroom, showing care, tenderness, excitement and frustration at the slowness of time before he can 'come unto my love'.

The young poet (and Vaughan Williams's future wife) Ursula Wood had known and loved Epithalamion since she studied it at finishing school in Brussels in 1928. She understood Spenser's references to Greek and Roman mythology and responded to the physical and spiritual elements of the wedding celebrations.

Ursula had heard and loved Vaughan Williams's Job whilst a student at the Old Vic in London in the 1932/33 season. In the spring of 1938 she remembered the composer and, whilst living in Westerham, Kent with her then husband, Michael Wood, she wrote a scenario for a folk-ballet on the subject of Clerk Saunders and his sweetheart, Margaret. She found the courage to send this sad tale of love and death to Vaughan Williams at the Royal College of Music. The composer did not warm to this subject so Ursula suggested a new scenario for a work based on Spenser's Epithalamion. This proved to be a stimulating idea for Vaughan Williams who wrote to Douglas Kennedy (who was acting as a go between for the composer and Ursula) suggesting that the work needed a speaker to recite the lines, which "might be a new art form and interesting".

On 27 April, 1939 The Bridal Day (as the work was initially titled) was ready for a play-through. This was arranged at Cecil Sharp House with Joseph Cooper as pianist, Eve Kisch as the important flute soloist and the augmented Leighton Quartet, including Jean Stewart. Vaughan Williams conducted, narrated and sang the baritone part. He was pleased with the rehearsal and a first performance was scheduled for the autumn of 1939 featuring Ursula as the bride, a part that she "would love to have played." War intervened, however, and the work languished until Hubert Foss, Head of Music at OUP, pushed for a première performance at Hampton Court in 1953. This did not materialise but the BBC expressed an interest and the first performance was a black and white televised production on 5 June, 1953. Ralph and Ursula (they had married on 7 February that year) felt that this format did not work.

This relative failure convinced Vaughan Williams that the Masque should be reworked as a choral piece and this revision was finished in 1957. The speeches and dances were set for an enlarged chorus and, to maintain balance, the string quartet was increased to a full complement of strings. In the revised work, to be called Epithalamion, all eleven sections include the chorus rather than only six scenes from the Masque.

This new recording from Albion Records features both versions of the work, with the Britten Sinfonia conducted by Albert Tongue.

Even by their enterprising standards, the latest release from Albion Records  the recording label of the Ralph Vaughan Williams Society   is an exceptionally interesting one. It couples the 1957 cantata Epithalamion (a setting of texts by Edmund Spenser) with Vaughan Williamss original 1938 masque version of the same material, entitled The Bridal Day. The young poet Ursula Wood (who would later become Vaughan Williamss second wife) had originally approached the composer in spring 1938 with a different project, but their focus soon shifted to Spensers Epithalamion, which recalls the wedding rites of ancient times, and the resultant masque scenario gave rise to some of RVWs tenderest music.

Side by side (and spread across two discs selling for the price of one), the two versions make for a particularly rewarding comparison. The Bridal Day is scored for narrator, baritone, small chorus, string quartet plus double bass, flute and piano. Some fifteen minutes longer than the later cantata version, it includes not just passages of narration (delivered with an admirable mixture of poise and feeling by John Hopkins) but some memorable, folk-style instrumental dances. Small the ensemble may be, but the members of the Britten Sinfonia caress the musics modal contours with such passion that the effect is much bigger than the means. Its a shame that Vaughan Williams felt the settings and choreography for the delayed first performance (a television broadcast in 1953) didnt work, for the extra music contained in this version, much of it folk-inspired, deserves to be far better known. Alan Tongue directs a performance of great commitment from the Britten Sinfonia and the Joyful Company of Singers, and admirers of the composer will surely relish the opportunity to get acquainted with this rarity.

Its fascinating to go from the works chamber version to the better-known 1957 cantata. Jettisoning the speaker and much of the purely instrumental music, this expands both the choir and the string section (to a full string orchestra). Here the opulence of the revised scoring and the greater role for chorus and baritone (Philip Smith in splendid voice) make up for the loss of intimacy and the cut dances. In this performance, the choir is particularly impressive, bringing a sense of involvement that emphasises the musics folk connections. Once again, Laura Lucas puts in a deft performance on flute and piccolo.

Yet, for all the revisions sumptuousness, theres a nagging feeling that something special was lost when Vaughan Williams abandoned the innovative, music-theatre style scoring of The Bridal Day. Now, thanks to Albion Records, listeners can judge for themselves. And, of course, we dont have to choose between versions when we at last have both, and in very accomplished performances.

The recording, made in Londons Henry Wood Hall, is pleasingly immediate and Stephen Connocks detailed booklet notes are first-rate, accompanied by full, annotated texts to make this a really attractive package.