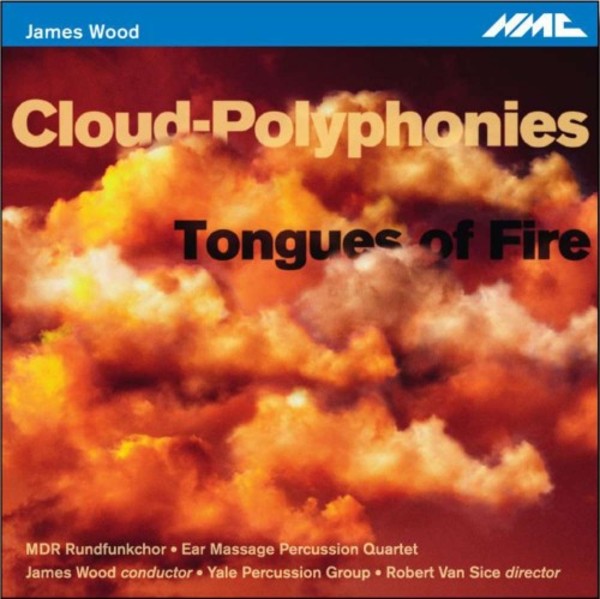 James Woods multi-faceted career has led him into an extraordinarily broad spectrum of musical activities, as conductor, composer, musicologist, instrument designer and percussionist.

Tongues of Fire (2001) is a work for symphonic chorus and percussion quartet, written for the 140th anniversary of the Yale Glee Club. Conscious of the enormous tradition of American university Glee Clubs, and the part that gospel and spiritual music has played in it, Wood emphasizes Americas rich cultural diversity using the story of Pentecost. The central text from the Acts of the Apostles is set in various languages, starting in Latin-American Spanish and splintering off into Hebrew, Maori, Jamaican English, Latin, Hungarian, Russian, German and French. A quartet of oil drums, plus cowbells, gongs, guiros and metal rods provide percussive timbral richness and power. These combine with a variety of vocal styles, including chanting, singing, hissing and whistling, to give the work a tribal feel.

Percussion sextet Cloud-Polyphonies explores the movements of large formations of organisms - whether animals, insects, birds, fish, water, steam or crowds of human beings. The first movement, Starlings, is written for six marimbas and woodblocks, the second, Clouds, for metal instruments and prepared piano, and the third, Buffalo, for drums, simantras and bullroarers.

James Wood studied composition with Nadia Boulanger in Paris before going to Cambridge as an organ scholar, and
to the Royal Academy of Music in London to study conducting and percussion. In the 1990s he founded the London Centre for Microtonal Music and its ensemble, Critical Band, and was active in the dissemination of microtonality on many levels. He was also professor of percussion at Darmstadt.

James Wood is an outstanding percussionist as well as a composer and conductor, and all three strands of his musical life come together in Tongues of Fire, his 2001 piece for chorus and percussion quartet. Its a setting of the Pentecost story, taken mostly from biblical sources, fleshed out with other texts. They are sung mostly in Latin American Spanish (chosen for its crisp rhythmic articulations, and possibilities for salsa-like syncopations, says Wood), apart from a climactic section when the description of Christs followers speaking in tongues triggers an eruption of different languages from the chorus  Hebrew, Maori, Jamaican English, Latin, Hungarian, German and French. Its an especially virtuoso moment in Woods exuberant choral writing, which is constantly propelled by his equally inventive writing for the percussion quartet playing on oil drums, from which they extract an amazing range of textures and colours, which are vividly realised by the Ear Massage Percussion Quartet.  Andrew Clements
The Guardian 8 April 2016