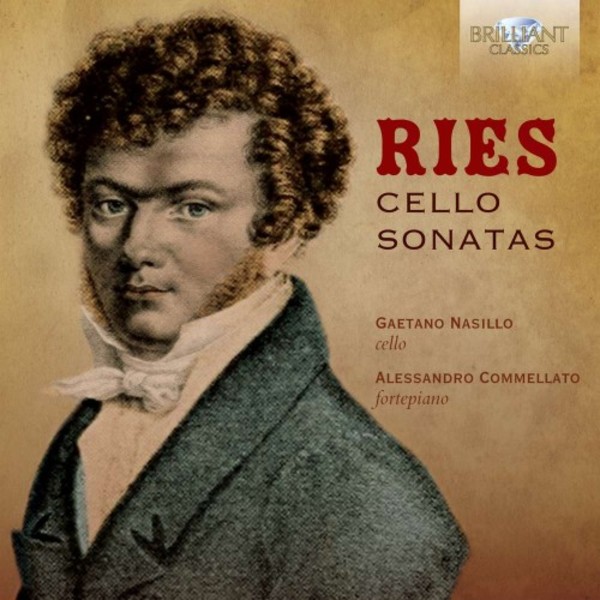 Best known now as a young friend and ever-patient amanuensis to the increasingly cantankerous Beethoven, Ferdinand Ries (1784‐1838) was himself the most talented member in a distinguished family of musicians. It was his father Franz who taught piano to both him and Beethoven in Bonn, and had the melancholy fortune to outlive his son by eight years after Ferdinands death in 1838. The son became Beethovens pupil in 1801, and while the teachers comment that he imitates me too much is not unfair, one can only extend sympathy to poor Ries: what was he to do with such a master?

Certainly the Polonaise of the Cello Sonata op.20 proceeds with the swagger of Beethoven in popular style, bouncing along like the finale of the latters Triple Concerto. The dates of this work and the one immediately following it are uncertain, but they bear a dedication to Bernhard Romberg, author of the influential method for the cello, and teacher of Ries from the age of five. Once Ries had left Vienna in 1809 to pursue a career as a touring virtuoso he met Romberg in St Petersburg and toured Russia with him; the sonatas may date from this period.

The Sonata op.25, however, definitively bears the date of 1823 on its autograph and is fully a work of Riess maturity, written once he had settled in London where, to quote Greenes Biographical Encyclopedia of Composers, he settled down concertized, taught, composed and acquired fame, money, and a charming wife named Harriet Mangean. The scale of this Sonata is positively Schubertian; so, too, the cast of its long‐breathed melodies, and the Romantic gloom of its Grave introduction.

These historically informed recordings are the work of two experienced Italian musicians who have played with many distinguished ensembles specialising in music of the Baroque and Classical periods. Gaetano Nasillo is one of todays most renowned baroque cellists, while fortepianist Alessandro Comellato has recorded Hummel Piano Concertos to great critical acclaim for Brilliant Classics (BC 94338).