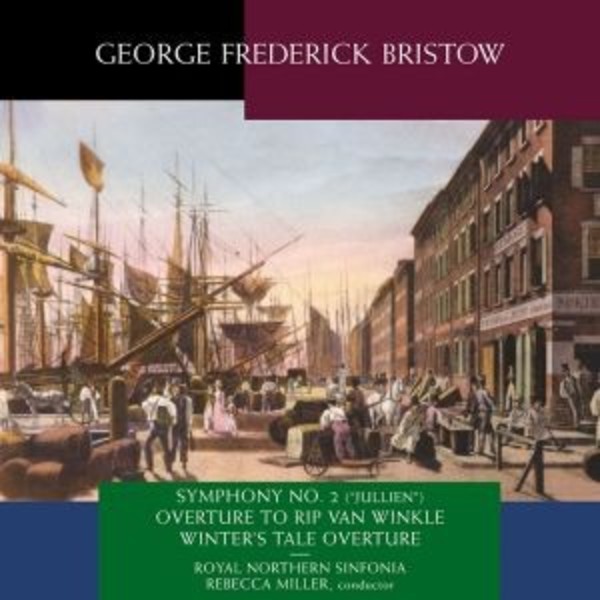 An essential addition to the discography of nineteenth-century American orchestral music.

George Frederick Bristow (18251898), a pillar of the New York musical community for most of the nineteenth century, was a composer, performer, conductor, educator, and a strong advocate for American music. His musical training took place entirely in New York, where he studied with his father and several prominent members of the Philharmonic Society, now the New York Philharmonic Orchestra. Bristow's Symphony no.2, 'Jullien', was commissioned by its namesake, the French conductor Louis Antoine Jullien, in 1853. A substantial work in D minor, it is in four movements and is scored for a standard early nineteenth-century orchestra.

The work is clearly 'Europeanist' in orientation, for Bristow used as his models several symphonic works by Beethoven and Mendelssohn that had been a regular staple of the Philharmonic Society concerts during its first ten years. Stylistically, the Symphony is solidly aligned with the more 'conservative' Romantic-period composers rather than with 'radical' (i.e., programmatic) symphonists such as Berlioz or Liszt, whose orchestral music was still mostly unknown in America at mid-century.

This is the world-premiere recording of the recently published Critical Edition of Symphony no.2 by musicologist Katherine Preston, who has also contributed a richly informative essay in the accompanying booklet.

Premiere recordings of the Overture to Rip Van Winkle (1855) and the Winter's Tale Overture (1856) round out the programme.

Anyone who admires the Mendelssohnian grace and neo-classical precision of Gounods and Saint-Saënss early symphonies should find Bristows glowing cantabile and subtle cross-referencing to Beethoven, Weber and Schumann congenial.  Avoiding any sense of a dutiful run-through of neglected repertoire, Rebecca Miller inspires the Royal Northern Sinfonia to play with captivating spontaneity, heartfelt phrasing and immaculate internal balancing, enhanced by impactful sonics from Simon Fox-Gál. A winner.  Julian Haycock