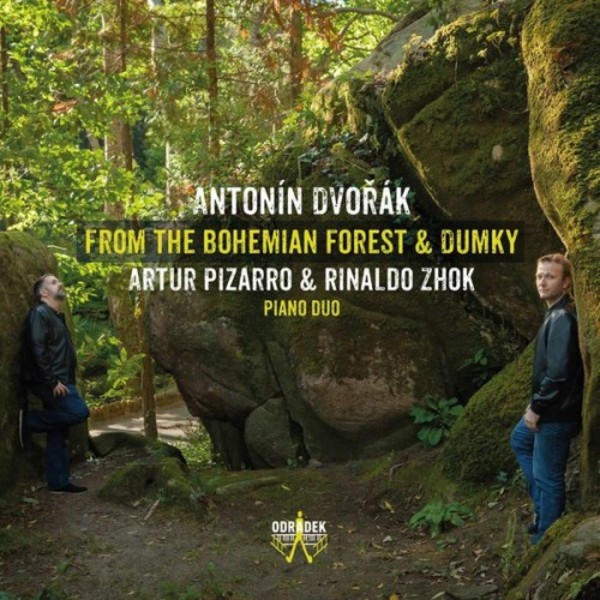 Dvorak - From the Bohemian Forest & Dumky

Both pianists were also taught by the great Aldo Ciccolini, whose legacy continues to influence them. Inspired by each other's interpretations, they decided to collaborate, forming the Pizarro-Zhok Piano Duo in 2014. Both pianists are passionate advocates for music written for piano four hands (as distinct from music for two pianos). This repertoire, too often underrated, is described by the artists as representing 'the most profound and complex form of making music together'.

Dvorak is amongst the most prolific composers of music for piano four hands, achieving a rare balance between musical depth and sensitivity, and an appealing honesty and immediacy.

This disc features one of the great masterpieces for piano duo, Dvorak's From the Bohemian Forest, which takes the listener on a dream-like journey into a vivid musical landscape. Dvorak's poetic music sheds the conventions and inhibitions of the piano-writing of his time, creating an array of striking effects which transport the listener into beautiful Bohemian woods. In the process, Dvorak requires that the pianists act as one, with a single concentration of purpose and precise execution of intricate technical demands. The results are breathtaking.

The disc also features Dvorak's own arrangement for piano duo of his 'Dumky' Trio  an arrangement which is not a transcription, but may be regarded as a parallel version, equal to the Trio in gravitas and significance. As the artists put it: 'This is equivalent to a painter who portrays the same subject several times, highlighting different perspectives, aspects and techniques.'