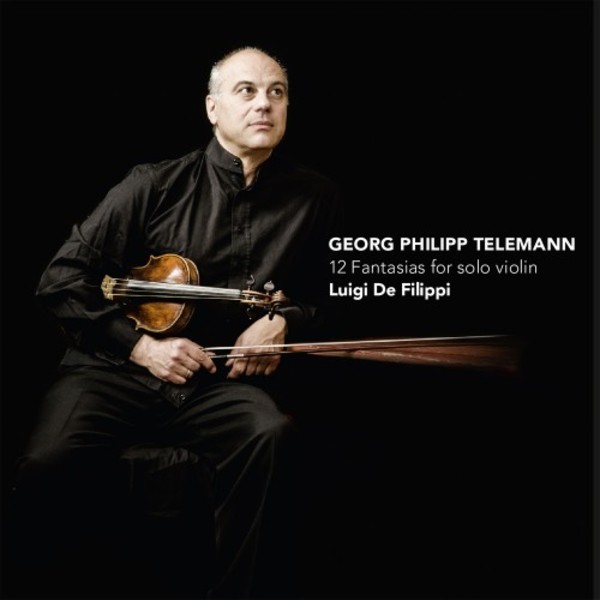 Telemann's 12 Fantasias sit alongside Bach's Sonatas and Partitas as great Baroque masterpieces for solo violin. A seldom recorded work, especially on a period instrument as played here by Luigi De Filippi, the Fantasias deserve to be better known by all lovers of Baroque music.

Telemann's solo violin Fantasias were published in 1735, some 15 years after the appearance of JS Bach's Sonatas and Partitas for unaccompanied violin. It is not known if Telemann had heard Bach's masterpieces, but if anything, Telemann's gems remind one of Bach's cello suites: clever music, overflowing with melodic wealth and charm. Telemann also moved swiftly from one source of inspiration to another, pouring out with unhampered ease exquisite melodies, sketches of learned fugues, folk-like cantilenas, nursery rhyme tunes. Each Fantasia consists of three or four short movements.

The violinist and conductor Luigi De Filippi was concertmaster in such orchestras as the Rome Opera House, La Fenice Theatre in Venice, the London Mozart Players, and the Flanders Orchestra in Antwerp. He made his debut as conductor with the London Mozart Players, and has appeared as soloist-conductor at London's Queen Elizabeth Hall, Royal Festival Hall and Barbican Centre, the Concertgebouw in Amsterdam, and the Palau de la Musica in Barcelona.

De Filippi is the violinist of the Voces Intimae piano trio, with whom he's recorded discs of Schumann (Robert and Clara) and Theodore Gouvy for Challenge Classics. In 2012 Challenge released his recording of Giuseppe Tartini's Sonatas for solo violin.