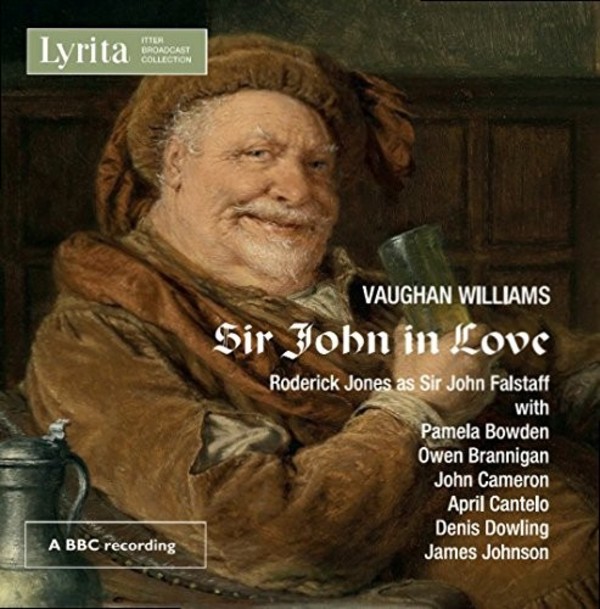 Of all the musical forms essayed by Ralph Vaughan Williams (1872-1958), his operas have received the least recognition or respect. Yet he was incontestably a man of the theatre. The first professional staging of Sir John in Love was given by Sadlers Wells Opera in April 1946. In July 1958, less than a month before he died, the composer attended a performance at the Sadlers Wells Theatre. After this, it is thought not to have graced the professional stage in Britain again until 2 March 2006 when English National Opera revived the work at the London Coliseum.

In this 1956 BBC studio recording, Roderick Jones makes an ideal Falstaff, commanding and vulnerable in equal measure. His love-song in Act II, O that joy so soon should waste, is both droll and touching. At the end of play, this butt of ridicule is allowed to become a Master of Ceremonies, conferring his blessing on all, and it is a measure of Joness multilayered portrayal that the transformation is effected with ease and dignity. This portrayal is the jewel in the crown of a reading in which a whole community of colourful characters comes to life.

THE LYRITA RECORDED EDITION TRUST ITTER BROADCAST COLLECTION
In 1952 Richard Itter, the founder of Lyrita, began to make domestic recordings of BBC transmissions using state-of-the-art disc and tape recorders. He documented his collection but rarely listened to it, thus preserving a pristine archive. The Lyrita Recorded Edition Trust began a transfer programme in 2014 with the intention to release the best and rarest of these recordings to the public.

Conducted with nonchalant skill by Stanford Robinson, the playing and singing are near-flawless, with one singer after another happily showing how to rise to an opportunity while not hogging the show. ... The recorded sound is excellently true and mellow for the vintage  only a little recessed, and conveying a feast of vocal and orchestral detail.  Malcolm Hayes
BBC Music Magazine July 2016