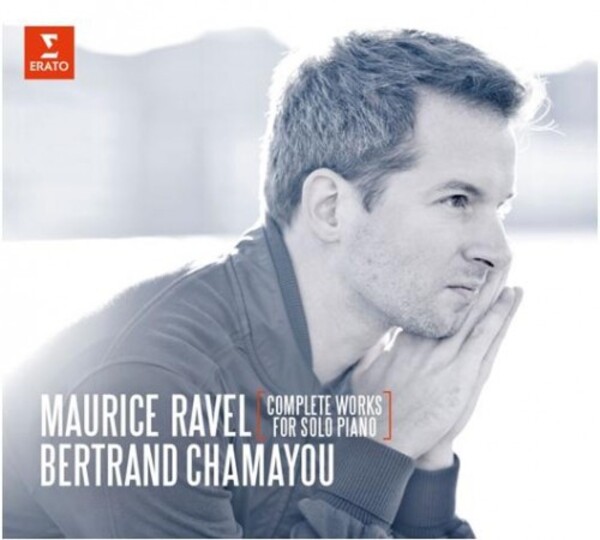 For his second release on Erato, Bertrand Chamayou is dedicating two CDs to the complete solo piano music of Ravel. My style of playing and the way I imagine sound can be largely attributed to Ravel, says Chamayou, Recording his music is not just a return to my roots, but also a natural stage in my development.

This new set makes a fitting successor to Chamayous debut disc for the label: released in early 2014 and devoted to music by Schubert, it was praised by the Sunday Times as an affecting, beautifully performed disc, by Pianist magazine for playing of intellectual conviction paired with a singing tone of heart-breaking beauty, and by the Telegraph for playing that radiates a generous Schubertian spirit, thoughtful in its shaping, structurally cohesive, absorbing in a spectrum of pianism that draws you into the musics expressive heart.

His second album for Erato shows Bertrand Chamayou to be an uncommonly adept interpreter of Ravel. The light, playful depiction of a fountain, Jeux deau is handled with such delicacy you can discern the sunlight glittering through individual droplets; [...] but it's Gaspard de la Nuit that best shows off his skills, particularly the desolate introspection of Le Gibet, constantly on the verge of drifting away, held in place just by the anchoring repetition of a single note that becomes like a tolling bell, before that final dive into the demented darknes of Scarbo.
The Independent 13 February 2016

The young Frenchman has been playing Ravel [...] since his childhood. These recordings of Ravel's most important piano works are his first at the height of his powers. [...] He begins with a limpid Jeux d'eau, played with liquid ease. [...] For Ravel's greatest piano composition, Gaspard de la Nuit, he summons an almost orchestral palette of colours, evoking the protean water nymph of Ondine in cascading arabesques and delicate, darting flourishes, while Le Gibet and Scarbo have rarely been imbued with such mystery.  Hugh Canning (Album of the Week)
The Sunday Times 14 February 2016

Here, in some of the 20th centurys most familiar and beloved piano music, are revelatory performances of breathtaking beauty and incomparable power. Most striking, perhaps, is their unforced naturalness. Never waylaid by wealth of detail and opulent texture, Ravels harmonic movement is given singularity of purpose. Everything flows with the inevitability of speech, precisely articulated, direct and unmistakably sincere. [...] Superlative Ravel seems almost in abundance these days  think Bavouzet, Thibaudet, Queffélec or Lortie. But for my ears, Chamayou brings everything home in a way that is deeply personal, vivid, unique. No one who loves French music or exquisite piano-playing will want to miss this. Patrick Rucker
Gramophone March 2016

French pianist Bertrand Chamayou has the right pedigree for Ravel: he studied with teachers at the Paris Conservatoire, with teachers whose lineage goes straight back to the composer, and it shows in the rock-solid technique and unfussy, unwavering interpretations he brings to this collection. Theres a confident swagger to the virtuosity of Valses Nobles et Sentimentales, and Chamayou articulates bittersweet melodies such as Pavane pour une Infante Défunte with striking straightforwardness.
The Guardian 12 February 2016