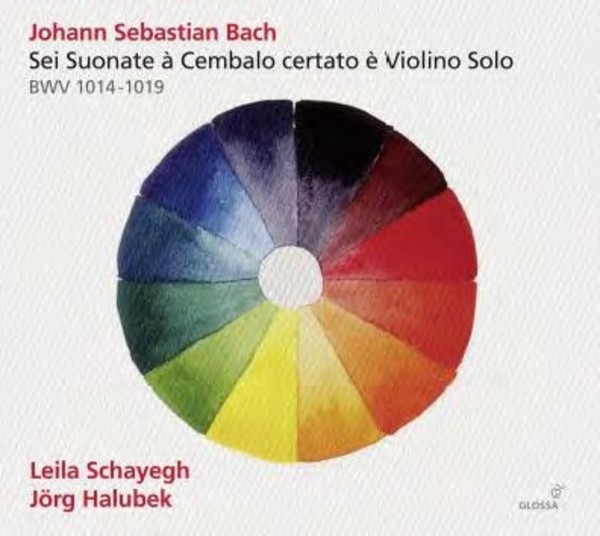 The collections title, 'Sei Suonate à Cembalo certato è Violino Solo', reflects the close partnership demanded of the violin and harpsichord players, with Bach moving away from the idea of continuo support for a solo instrument and constantly making new technical demands on the musicians, and thereby approaching the concept of the trio sonata.

Completed by around 1725, most of these richly characterful works combine the Italian style and a cantabile tone with elements of German contrapuntal style.

The artistic partnership of Schayegh and Halubek, now in its tenth year, has seen them record chamber music by Jean-Marie Leclair, CPE Bach and Giovanni Mossi but the Bach Violin Sonatas represents their first joint recording for Glossa. Leila Schayegh has been part of the recent much-acclaimed recording of Caldara Trio Sonatas, Op.1 with Amandine Beyer, as well as regularly having featured on many of La Risonanzas Glossa releases.

As Schayegh and Habulek mention in their shared booklet essay guiding the listener through the Violin Sonatas (and through the 12 represented keys which are also reflected in the sets graphic design), they have added two movements from the earlier version of the final Sonata, BWV1019a, as a kind of cheerful and delightful encore.

With JS Bachs sonatas for violin and obbligato harpsichord, though, [Leila Schayegh] now tackles repertoire that is not only considerably higher in quality but which also has a discography which features most of the best Baroque violinists of the last 40 years. That she does so with distinction is testament to her secure technique and shining tone (these pieces are merciless to anyone with a timid sound or dodgy tuning), as well as to the clear vision she and Halubek share of how each of the sonatas expresses itself. Technical prowess certainly stands them in good stead in the faster movements, which bowl along at speeds that are fast enough to be exciting and carefree without ever sounding rushed (eg in the finale of Sonata No 3). But it is in the slower movements that this duo excel, regularly finding atmospheric beauties and depths in them that many others have either missed or are simply unable to achieve.  Lindsay Kemp
Gramophone March 2016