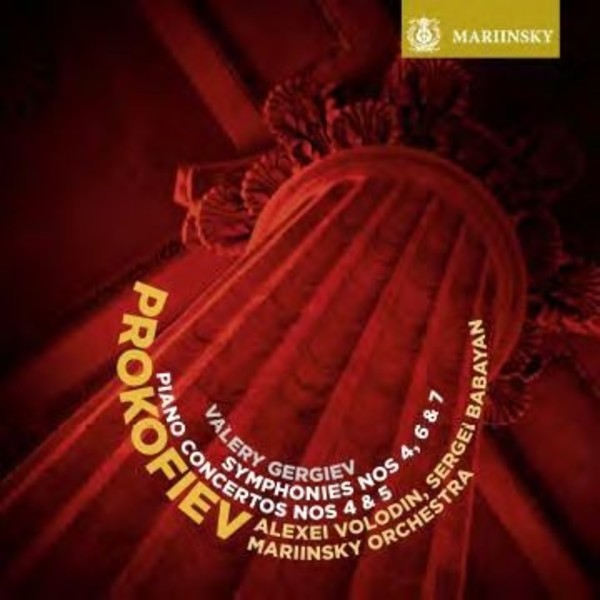 This major release launches the Mariinsky labels projects to honour the 125th anniversary of Prokofievs birth. A long-time champion of the music of Prokofiev, Valery Gergiev conducts Symphonies Nos 4, 6 & 7, coupled with Piano Concertos Nos 4 and 5. The result is a 2-SACD set programmed to showcase some of Prokofievs finest works written before and after the Second World War.

Prokofiev began his 4th Symphony in 1929, drawing from the musical material of his ballet 'The Prodigal Son'. The Symphony was premiered the following year, though he substantially revised the work 17 years later.

Symphony No.6 was written in 1947 as an elegy to the tragedies of World War II. Speaking of the Symphony, Prokofiev said, "Now we are rejoicing in our great victory, but each of us has wounds which cannot be healed. One mans loved ones have perished, another has lost his health. This must not be forgotten."

The 7th Symphony was completed in 1952, a year before the composers death. It was well-received and was awarded the prestigious Lenin Prize in 1957 at Miamis Knight Concert Hall.

Acclaimed for his highly sensitive touch and technical brilliance, Alexei Volodin performs Prokofiev's Piano Concerto No.4. Premiered in Berlin in 1956, by the West Berlin RSO, it was written for the one-armed pianist Paul Wittgenstein, and was the only one of Prokofievs piano works that was not performed during his lifetime. Alexei Volodins performance was described as "superbly controlled and beautifully subtle" by The Guardian.

The American-Armenian musician Sergei Babyan performs Prokofievs last complete piano concerto, No.5. The Telegraph reviewer was sufficiently moved to say: "Never have I seen so many fast and furious hand-crossings, so many dizzying flights from top to bottom of the keyboard, all performed flawlessly".

"The unison playing of the Mariinskys first violins sounded like one big impressive instrument, Gergievs minimizing of conventional direction and profile heightened the pieces shattering Mahlerian ruptures when they came" - Seen and Heard International [Symphony No.6]

"Sergei Babayan returned for (Piano Concerto) No.5, a work of sly wit and dark humour. The audience loved every minute" - London Evening Standard