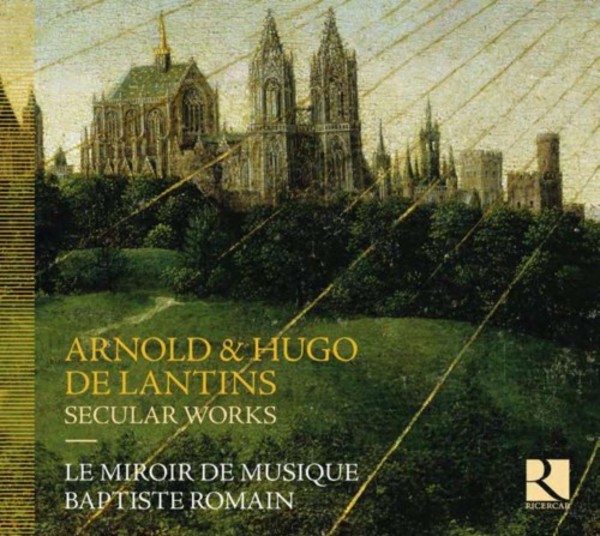 The composers Arnold and Hugo de Lantins were natives of the diocese of Liège, but it was in Italy, principally in Pesaro and Venice, that their presence is confirmed between the years of 1420 and 1430.

As with the works of Johannes Ciconia, a fellow native of Liège whose time in Italy had preceded theirs, their secular and sacred compositions are preserved in manuscripts copied in Italy. Closely rubbing shoulders with their illustrious contemporary Guillaume Dufay, the Lantins brothers combined archaic traits with the earliest characteristics of the Renaissance.

Le Miroir de Musique presents a large selection of French and Italian chansons which enriches our view of the cultural sophistication of the Italian courts at the start of the 15th century.

Le Miroir de Musique is one of a number of young groups led by an instrumentalist but combining voices as well. These ensembles make the case for instrumental participation in this repertory as compellingly as Gothic Voices did for all-vocal performance, principally by being very discriminating in their choices for individual pieces. Gone is the everything but the kitchen sink approach of 40 years ago; gone, too, is the mangling of poetic forms to showcase instrumental virtuosity (not to say instrumentalists egos).

Not that these young musicians are slouches technically: an intricate unison line shared on recorder and vielle (in Amour servir) is flawlessly executed. The singers, as Ive suggested, are on a par with them, the intricate cross-rhythms of Je suy exent being negotiated with distinction. This is one of the most satisfying 15th-century recordings Ive heard in a while: specialist repertory that doesnt deserve to be.  Fabrice Fitch
Gramophone April 2016