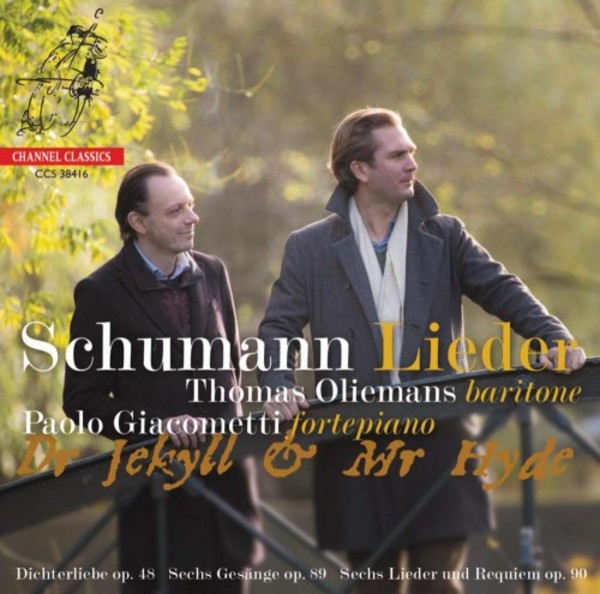 Two souls, alas, reside within my breast Faust ascertained, and he was not the first to do so. From time immemorial we have quite some struggle with our inner contradictions, and we try to restrain them in many ways. Knowledge, alchemy, music, literature and drink are just some of the paths we follow in search of clarification and in the hope of gaining mastery of these troublemakers. Through the centuries all this has given rise to many literary and mythological couples: Apollo and Dionysus, Yin and Yang, but Florestan and Eusebius, Schumanns literary and musical alter egos, are part of this tradition as well. The cautious, gentle Eusebius, as distinct from the more impulsive, high-spirited Florestan, prevail over both the musical and literary oeuvre of Schumann, as a line of approach, a disguise, and an attempt to get a grip on his inner turmoil.

In his Dr Jekyll and Mr Hyde (1886) the Scottish writer R L Stevenson created two similarly mythical figures in the same vein. But while Schumann (and many before him) entertains the hope or illusion that Florestan and Eusebius will come to terms with one another in a happy ending, Stevenson has the well-meaning doctor Jekyll meet his end through his own evil self: the beastly murderer Mr Hyde.

Dutch Italian and Italian Dutchman Paolo Giacometti is known as a soloist playing both modern and period instruments. He has recorded many solo albums with Channel Classics. He recently founded the Hamlet Piano Trio with violinist Candida Thompson and cellist Xenia Jankovic, and started performing with baritone Thomas Oliemans, who is himself a well-known opera star and concert singer, and a much sought-after recitalist, known for his innovative programming.

This is their debut recording together.