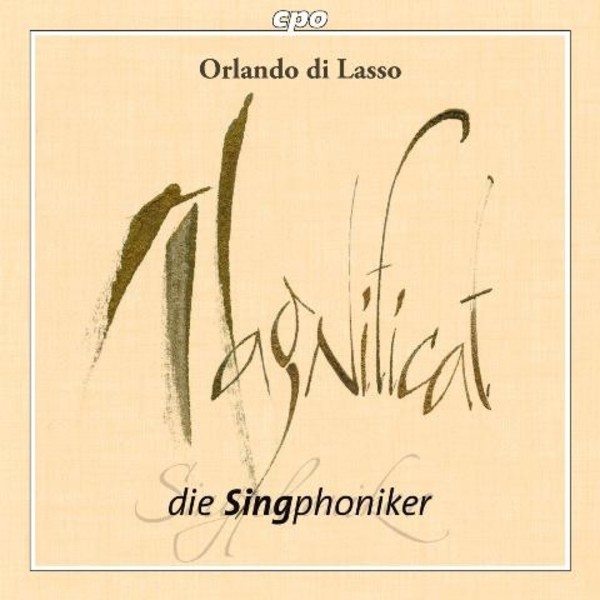 After their successful CD featuring hymns by Orlando di Lasso, cpo are now releasing a new CD with the Singphoniker entitled 'Magnificat'.

Born around 1530 in French-speaking Mons and educated in Italy, Orlando di Lasso spent his maturity in the service of the ducal court of Bavaria in Munich. He was thus one of the last great peripatetic Netherlanders of the Renaissance, and was widely acclaimed as the leading musician of his day. His output  much of which was published in his lifetime  was vast and wide-ranging, both sacred and secular, and even today only a fraction of it is available on disc.

A particularly important part of Lasso's oeuvre in Munich, hitherto relatively under-represented in recordings, comes in the form of no fewer than 101 settings of the Magnificat  Mary's song of praise from St Luke's gospel, which forms the centrepiece of the Catholic service of vespers. This was evidently celebrated in some style at the Bavarian court, and Lasso was systematic in composing versions for four, five and six voices in each of the eight Latin church modes (or tones). Most of his settings were composed in the alternatim style, with the odd-numbered verses sung to traditional plainchant, while the even-numbered ones were set polyphonically. Of special fascination are Lasso's forty 'parody' or 'imitation' settings, based on existing music by other composers, which seem to be associated with the Counter-Reformation movement of the 1570s.

The Munich-based vocal ensemble Die Singphoniker has already recorded a disc of Lasso's hymn settings for CPO, and now presents a CD of half-a-dozen of Lasso's parody Magnificats, coupled with the originals on which they are based. These range from a Latin motet by Josquin des Prez (the sumptuous Praeter rerum seriem), via Italian madrigals by de Rore, Berchem, Verdelot and Anselmo de Reulx, to Sermisy's playful French chanson Il est jour. Though the alternatim style lends a superficial similarity to the settings, the variety of models and diversity of techniques employed by Lasso in their expansion ensure that the listener's attention is constantly engaged. The highlight is undoubtedly the Magnificat on Praeter rerum seriem (described by the New Grove Dictionary as 'a magnificently elaborate six-voice work'), but every one of these settings provides ample food for musical thought.

The musicians of Die Singphoniker (joined in the six-voice works by a third tenor, Gerhard Hölzle) are enormously stylish, and their singing yields nothing in accomplishment to such better known groups as the King's Singers or the Hilliard Ensemble. Phrases are lovingly shaped, textures revelled in, and the balance superbly judged, with countertenor Johannes Euler excelling at the top of the range. The recording (a co-production with Bavarian Radio), made in the Himmelfahrtskirche in the Munich borough of Sendling, combines warmth and detail in an ideal perspective, enhancing all the subtleties of nuance in both Lasso's music and the performance itself.

This is a real feast for the ears, as well as an important addition to the Lasso catalogue with excellent documentation and full texts, strongly recommended.